Less More
14 Jan 2020 22:29 #154852 by J Green
Replied by J Green on topic Retrofitting a 1986 Maho MH400E
Hanno
Wonder if the belleville washers in the tool clamping section of the spindle are all working ?
Have heard that it is a pain to disassemble the Ott-Jacobs tool clamp section without breaking stuff. If you have to disassemble the vertical spindle -- I and many others could benefit from photos and Ott-Jacobs part numbers Might look up the spindle bore at the tool holder gripping fingers. I don't know what the gripping force is ,but there must be a +or - specification somewhere for 40 taper holders.
Bob
PS The rotary table is looking good ----

Please post some pictures if you disassemble anything, I'd very much like to see the insides of that machine!

I have a similar problem with my vertical spindle head, in that it started to turn on the hydraulic tool clamping pump when ran at higher speeds with a tool inside. It appears that the tool holder gripping fingers are worn and I should replace/repair them.

Since this is too much of a job for me right now, I switched to the horizontal spindle for all my Maho needs. But I don't really have any proper clamping equipment for the horizontal spindle, apart from an oversized swivel/tilt vise I bought second-hand. It'd be nice to order an angle plate or maybe have one cast at a local foundry and finish it off with a face mill. I've never used a decent fraction of the machine's 400 kg table load.

Yesterday, I saw a used MH800 E2 on surplex.com for 3300 €, with no takers. It was in Germany and had a manually-operated rotary table with an encoder. It looked nice, had all the docs and a horizontal arbor. Sometimes I think that instead of repairing my machine, it would be better to hunt for a less-worn one and replace the controller again, since at least I have some experience with the latter and absolutely none with the former.

Even if you do it yourself, unless you have the equipment, a nice rebuild will cost 5K€ at least (after you count in a surface plate, straight edge, handling and rigging equipment, part repairs and replacements, such as gibs, spindle and table regrinding, mending covers, etc., and not counting any servo replacements for superior dynamics or speeds/improvements over factory specs, and probably not counting worthy ball screws). Specialized companies over here would charge in the vicinity of 10K€, and take 3-4 months.

I'm on the fence whether to do a rebuild, but I can tell you it's a pain to shim everything you work on to get good dimensions on parts that need it. Each time you loosen the vise or a clamp, a bunch of Red Bull can strips fall out 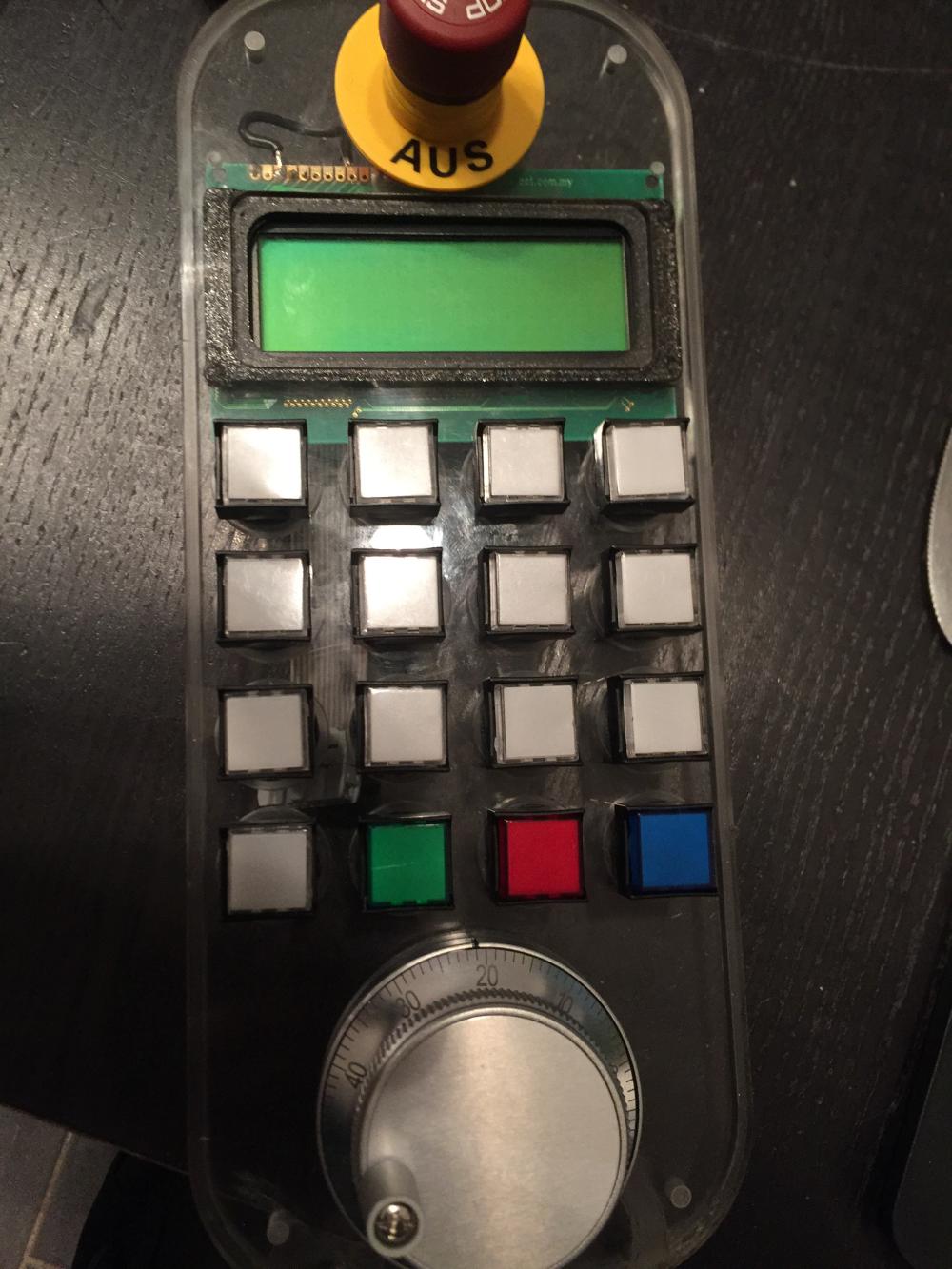 Slow down guys. Everyone got so excited about Hanno's new turntable, that we missed the 800lb gorilla dancing in the background!. Hanno doesn't get to to post a photo of a home made pendant without explanation or comment

Is this made using Peter (Talla83 ) circuit board?


By the way, Peter also designed a cute little 2 port expander for the MESA system. Sort of a 7i74 lite.

He generously posted the Gerber files to Github:
github.com/talla83/RS422-SmartSerial-Adapter

What is it like to watch the videos with Youtubes translated subtitles?

I followed his recommendation to use JLCPCB to have the boards made. $2 for five boards, including postage! The components are another €20 or so. I have a 7i96 inbound for a lathe project, and will use one of Peters boards to interface a 7i73.

Please post some pictures if you disassemble anything, I'd very much like to see the insides of that machine!

I agree with that. I still haven't seen any details on the internet on how to remove a Maho ball screw pulley. I know there is some sort of expanding collet which holds them, and there is a trick to removing them, but am not sure what the trick is.


I have a similar problem with my vertical spindle head, in that it started to turn on the hydraulic tool clamping pump when ran at higher speeds with a tool inside. It appears that the tool holder gripping fingers are worn and I should replace/repair them.

Don't really understand that. The hydraulics are not involved in the clamping, only the release (at least on the 400E). What mechanism would cause the control to be aware of clamping finger wear?
Mark

Don't really understand that. The hydraulics are not involved in the clamping, only the release (at least on the 400E). What mechanism would cause the control to be aware of clamping finger wear?

Well, outside of the tool change command, the pump turns on by itself when the pressure drops, without any input from the CNC. It knows the pressure in the system, has a screw you can use to adjust said pressure, and will switch itselft on if it detects that the pressure dropped. I was thinking that maybe the toolholder coming loose in the spindle would cause the pressure to drop and that would turn on the pump. Admittedly, I have no idea how the whole system works, as I've never taken it apart to look inside. I just have some experience with servicing the pump itself. The issue happens only with the vertical spindle, only at higher speeds, and only when a tool is physically in the spindle. After a short while, the pump turns on, like it does when you press tool release (which, needless to say, scared me shitless when it first happened). This didn't happen before.

Maybe one of the lines with the oil is coming loose, or a fitting needs to be replaced. Either way, I'd have to take the head off the machine and take it apart to check, which is a bit beyond me working alone at the moment. That vertical spindle easily weighs in excess of 50 kg, the last time I removed it to change the bearings I did together with the mechanic who was getting paid to take the spindle to his workshop for the replacement. I'd need some proper rigging equipment in the garage to do it alone.

RotarySMP wrote: I agree with that. I still haven't seen any details on the internet on how to remove a Maho ball screw pulley. I know there is some sort of expanding collet which holds them, and there is a trick to removing them, but am not sure what the trick is.

Is it a taperlock by any chance?

Or perhaps it is:
www.fennerdrives.com/trantorque/

Or maybe something altogether more Germanic?

I think it is something they came up with themselves.

Might be as easy as loosening the 6 cap screws on the4 hub cover plate, but I read somewhere there is more too it than that.
Mark

RotarySMP wrote: Might be as easy as loosening the 6 cap screws on the4 hub cover plate,

There doesn't look to be anything else that you _can_ do other than unbolt the hub plate.
But I can imagine those grip rings might not want to release. There looks to be no chance of pushing the pulley in further to loosen them, either.

Less More
15 Jan 2020 12:27 #154913 by RotarySMP
Replied by RotarySMP on topic Retrofitting a 1986 Maho MH400E
I'll find out soon enough. I really need to get of my arse and make the dolley, pull off the control module, elctrical cabinet, splash guards, table and cross slide and move it out of my garage into the machine shop. It will be good to be able to use the garage for all the dirty jobs (welding, grinding, tool grinding, sandblasting and painting) without having to cover and worry about the MAHO.
Mark

of course, I will document everything when I disassemble the ballscrew, table and Main-Spindle.
My pendant will use the Mesa 7i73. Yes, It looks similar to Toms SImple Handwheel but doesn't use Peter's PCB.
I wanted buttons for my 4th and a later 5th Axis, tool-release and coolant and therefore would be too "small".
See my scribble: 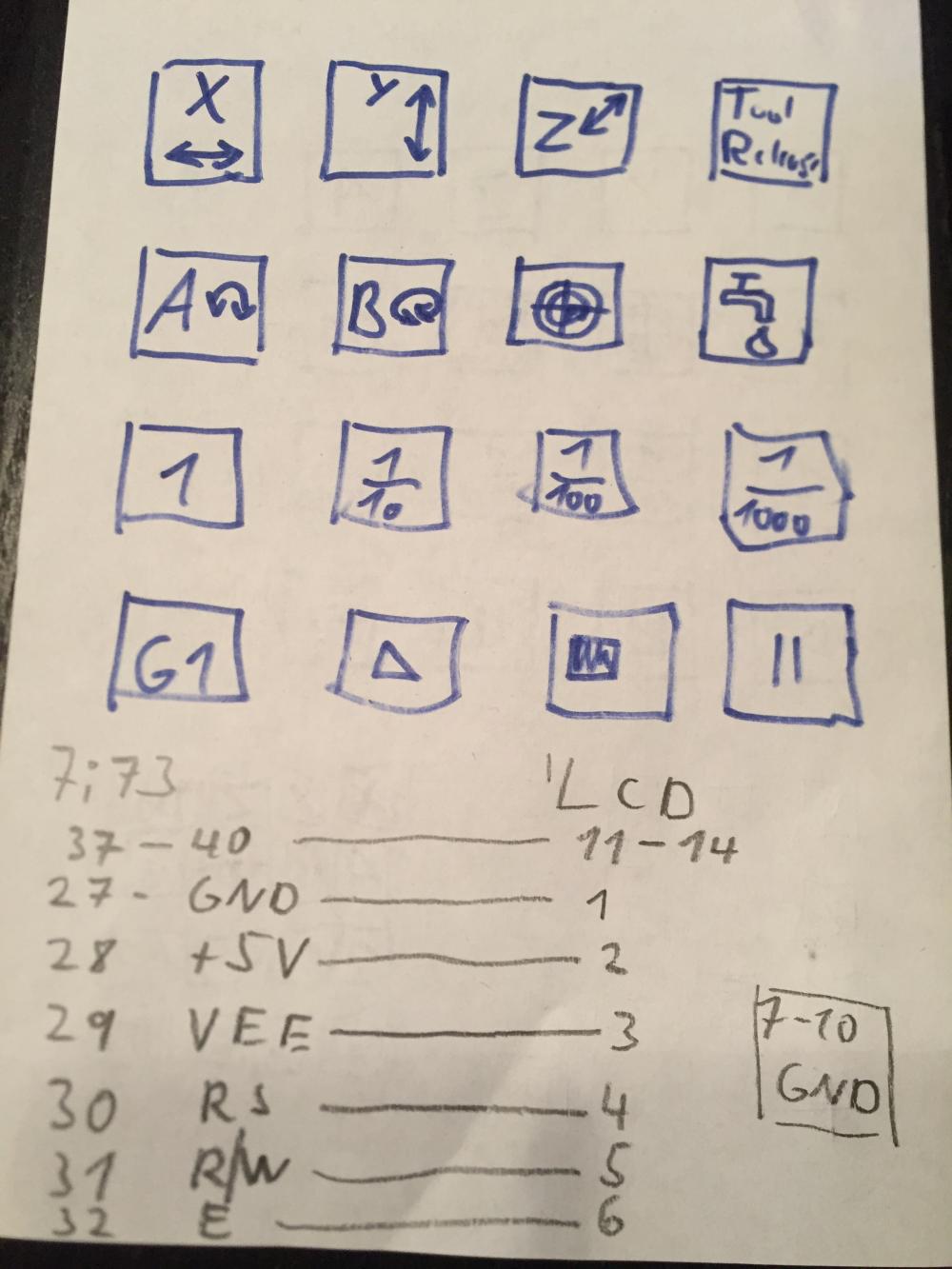 " EDIT: watching the automated subtitles on YT videos really sucks. " To me that is stating it nicely! But I barely understand English as a 1st language

You people having multi language skills are really lucky .
Removing the vertical head --- Have thought about making a steel plate to bolt on where the vertical head attaches and that plate having some type of jib-crane welded arrangement for lifting the table - vertical head - heavy stuff. Think I may be the Wimp of this group !
Glemigobles I thought you have a MH500E ? Was looking at my MH600E parts list and noted that reference to 500 - 600 - 700 vertical heads being interchangeable , just what the parts list notation noted.
Your hydraulic pump ---- Would be interested in what work you were doing to the pump . Does your machine have a tool changer? Hope your hydraulic leak is only a loose fitting .
Re scraping a MAHO does sound like a very big job. And yes my machines have a collection of the magic shims. I think finding a unworn/affordable machine is like looking for unicorns. When Mark mentioned that a MH400E was for sale ,I started to wonder what is involved for getting a machine sent to the U.S. I bet the payment - packing - shipping - customs would be a night mare.


Mark --
My 600E uses SPETH clamping sleeves type DS but noted that "Spieth" has a Type AK / IK an AL / IL clamping sleeve that may be what was used in your 400. Have read that the DS type can only be used one time which seemed strange to me. I removed a Speith DS clamped pulley from a servo motor, an just loosening the allen bolts didn't cause the clamp to relax enough . Had to lightly tap on the pulley before it released. Next time I will try to spray cool the clamp -warm the pulley .
Thanks for noting Hanno showing the hand controller and also Talla83's circuit board . Looks very interesting and I do intend to check into it.
What is the latest progress on the tool height addition? Hope you go into more detail about your lathe conversion -
My vote for your shop is still to enlarge the door. Could some "Bengay" along with a "Getter-Done Sticker" help?

Cheers
Bob
P.S. Remember watching cast iron being poured into a small mold with a platinum-platinum/rhodium thermocouple (inside a quartz test tube) for trying to determine what the melt chemical make up was. Liquid phase to solid - time temperature