Less More
05 Jan 2019 19:18 - 05 Jan 2019 19:24 #123564 by RotarySMP
Replied by RotarySMP on topic Retrofitting a 1986 Maho MH400E
That is a nice set up with the Elta hi speed spindle on the adaptor plate. Good solution. You are pobably right that it is better to run a separate VFD and high speed spindle rather than having the the gearbox and a speeder running for long periods.

I finished machining that shaping tool holder by engraving six letters. This online widget is really easy to use:
www.microtechstelladata.com/TextToNCcode.aspx
At 4000rpm it took nearly a half hour, and left a lot of burrs. Still pretty cool that this can also be done at a pinch. Tomorrow if it stops sleeting/raining/snowing I'd like to crank up the furnace and case harden it. 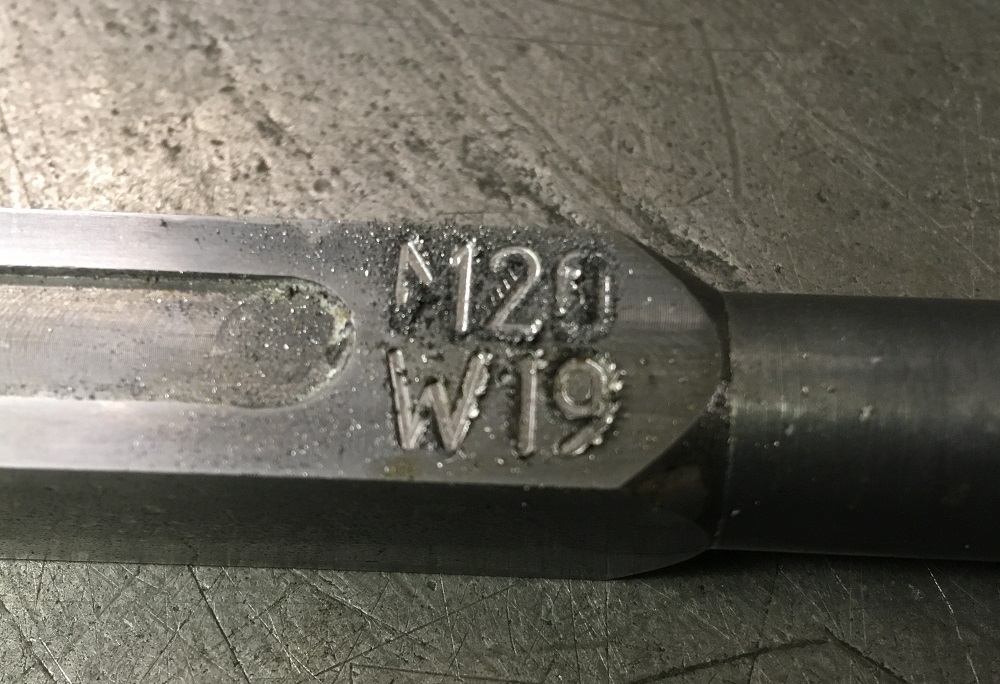 Then I had to play around with the AMF Bulle toe clamps I got for xmas. I have this slab of steel from the scrap yard which "needed" surfacing. Since the first time I tried the 100mm Sandvik face mill, I pulled the part out of the vise, I am taking it easy this time. Only 3 inserts instead of 6. Just 0.1mm depth and the only about 0.45mm per tooth. I didn't get finished before it was time for diner though.

Less More
05 Jan 2019 22:34 #123572 by andypugh
Replied by andypugh on topic Retrofitting a 1986 Maho MH400E
As an other option, I made a high-speed vertical to mount on the horizontal arm. I think the Maho has a "high Y" axis so the solution shown is great, but with a "Low Y" my idea might be worth considering.

RotarySMP wrote:
I am a bit suprised at how lame the acceleration of the Indramat installation is. There is a obviously a lot of inertia in those large drive components, but there is also a lot of power to push it around. How did MAHO increase the rapids on the later machines? courser thread ballscrews, or higher speed motors?


how did they do it? well, with a 7kw ac servo on the Y (vertical), and 2.5kw on the x and z all direct belt driven (no gears). even the rotary table had a 1kw servo, giving 30rpm and 450nm torque. the spindle was also a servo, 6000rpm at 8.4kw. the mh400 only has a fraction of that power because its just a tool room mill. maho's way was brute force when it came to the high performance models..


compare to my brother tc225 which goes the same speed and acceleration on 400w xy servos and 750w for the z. their way is to have less mass to move

I case hardened the shaping tool holder for an hour. I also dug out the bottle of blueing fluid to make it look finished.

Afterwards, the screw was binding in the thread, so I thought i'd run a tap down it to clean it out. 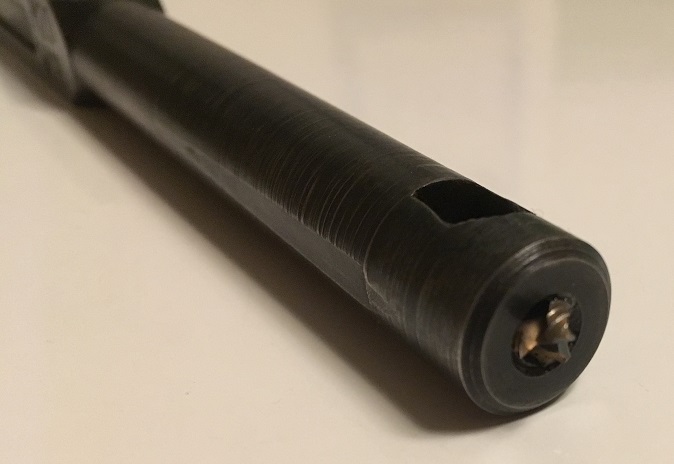 So I had to chop off the end with the angle grinder and weld on an new tip. Turned it back and cut the new thread so now I just need to test it out. But it is not as pretty anymore.
Mark

But it will ruin your thread and in your case you'd have to mill it again in hardened steel with a special tool, so that idea wouldn't really help you there. One hard lesson I had to learn about tapping on the CNC mill is that there are two cycles you can use, one in which you input the feed and another in which the controller calculates the feed based on other parameters. The difference is that feed overrride won't work with the second cycle (at least on the Philips)! So I broke a tap because the feed override didn't work and the spindle didn't have the time to reach it's programmed speed before the machine jammed the tool in the hole. It was also a lesson that just because I can pause a program to check if the thread I made is fine, I really shouldn't.

Andy, your attachment is fantastic, I've seen it before and was very impressed with the work you did. The only inconvenience it has is that it must be very heavy, so switching between the two spindles probably requires that hoist hanging over your machine. Even though my spindle is small and the plates are aluminum, it's still a heavy assembly that I have to be careful about each time I take it on or off.

Less More
07 Jan 2019 10:28 #123683 by cgroth
Replied by cgroth on topic Retrofitting a 1986 Maho MH400E
Marc,
if you look for Henninger "Schnellauf-Frässpindel" you can find inline planetgear spindle speeder up to 1:7,7 ratio. They look quite neat but even used ones cost a fortune. I think MAHO sold similar ones under there label.

Less More
07 Jan 2019 10:34 #123685 by RotarySMP
Replied by RotarySMP on topic Retrofitting a 1986 Maho MH400E
Good point about using a carbide ball end mill (not like I have one), but in this case the square was made by milling a slot and then welding on the end, so I just repeated that.

Andy, I really like how you make your machine parts and adaptors out of cast iron. As you say in your video, it's traditional. Since the MAHO overarm bolts to the same interface as the vertical spindle, and you have to take it off when it is not used, there would be nothing to gain mounting a high speed spindle to it, other than the prtential to increase the reach in Y direction, allowing engraving on larger panels. 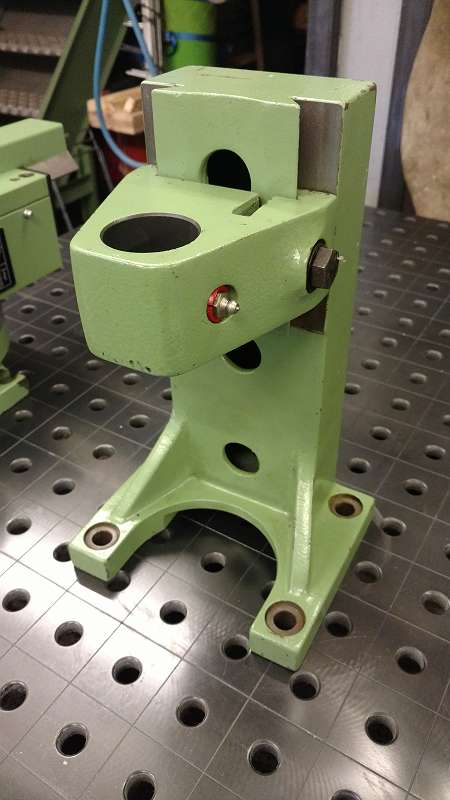 Less More
07 Jan 2019 10:49 #123690 by cgroth
Replied by cgroth on topic Retrofitting a 1986 Maho MH400E
Speed is primarily limited by the 3TRM2 servo amplifier. As an example Indramat says 3,5 Nm with 2-puls, 4,3 Nm with 3-puls and 5,2 Nm with "SELEKTOR" what ever that is, all for motor MDC10.1020 D. This drive is rated to 150 A max. pulse current. As there is no DC loop with its capacitors, the 3TRM2 can hardly deliver currents near that.
So it should be possible to increase torque by changing the amplifier to a state of the art 4-quadrant brushed motor controller only (but keep the motor temperature in mind!).

RotarySMP wrote: So I had to chop off the end with the angle grinder and weld on an new tip.

I think that you could probably have got that broken tap out. Normally after breaking off the remains of the tap will break down smaller quite easily if you hit it with a punch from various angles. You have the advantage here that you can get to it from both sides.

I have often wondered how well these work:
www.zoro.co.uk/shop/hand-tools/tap-extra...ractor/ps/ZT1001983X
I inherited one from my grandfather, but have never broken a tap of the specific size.

I have been watching ebay, ebay kleinanzeigen etc for a Spindle speeder, or Schnelllaufspindel, Big Daishowa etc. But from what I have been reading, it is probably a better deal to use a separate high speed spindle. The spindle speeders are still going to work the main spindle for quite long periods, and don't have the best reputations for reliablity.