Mostly do programming in metric in NCAM.

Issue: Interface seems to take its formatting (eg number of decimal points, defaults etc) from the machine config, so the interface is optimsed for imperial inputs.

This sub can return the tool diameter in the units of the G-Code (G20 or G21) for an imperial machine, but I don't know how to generalise it to return the tool diameter in the G-Code units, regardless of the machine being imperial or metric. At least not natively. I suppose you could read the LINEAR_UNITS = variable in the [TRAJ] section of the config file to figure out whether to multiply or divide by 25.4?

Typically whenever I try to program in metric on the inch config, I tend to get errors for anything that uses tool compensation, i suspect because the lead-in radii and compensation values are a function of the tool diameter, which it thinks is 0.3937mm rather than 0.3937in (10mm) or visa versa.

As a work around, I made a "psuedo metric" machine configuration on a virtual sim machine, did my metric NCAM programming in that (which worked great) then ran the resulting code on the real inch machine, which also worked fine. But I would like to be able to the programming on the actual machine too - especially for the "uh oh, found error need to fix..."

Less More
26 Jul 2019 10:42 #140640 by pl7i92
Replied by pl7i92 on topic NativeCAM - using metric on imperial machine
ncam settings can read both imperial or metric
its in the settings set it then reread the file and you are up
no need to change things on generating 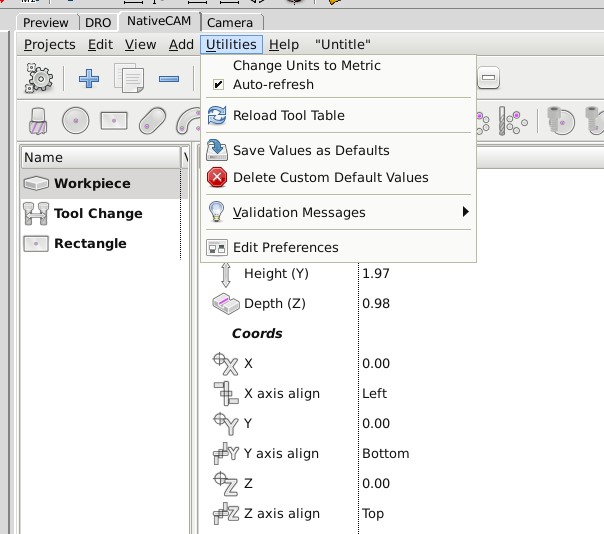 Clicking Change Units to Metric will convert all the values however the generated G code is still in imperial units. As it has a G20 it should all cut fine though.

Using a metric machine configuration generates the code natively in mm with a G21, so again should cut fine, but a LOT more human readable if the desired programming units were mm.