Less More
13 Jun 2014 23:40 #47957 by Sterling
To Boldly Go...! was created by Sterling
This took me a few weeks to design and make! I used Pain Shop Pro; Inkscape, and Makercam. for the design.
For the lines, I made them using Paint Shop Pro, then printed out a couple sheets, lined them up, taped transfer paper under them then taped those to the board and traced the lines. Then removed the papers and went over the lines using a ruler, compass and micro-ball pens.

Machine problems:
- The entire program was designed with an 1/8" (0.125") bit in mind; the piece of maple was too deep for the bit, so I ended up stopping it after a couple passes then finishing it up, using the band saw and scroll saw.
- I had made two of them in the event something went wrong, which is good because one of them 'jumped' when I had it on the band-saw, shortening one of the warp nacelles!
- The other problem (and one that I am still having) is that no matter what bit I am using, it seems to burn the wood during arcs/circles. Straight lines are fine - but curves/arcs/circles are a problem. I'm thinking that I need to adjust the speed or feed at these points but I don't know if it is going too fast or slow

Anyway...I brought the completed one into the Comic Convention when it came into town. As you can see in the 2n photo, I had it signed by William Shatner himself! When he was signing it, he remarked (in that inflection that he does so well)
"You did a helluva jhaaab!" 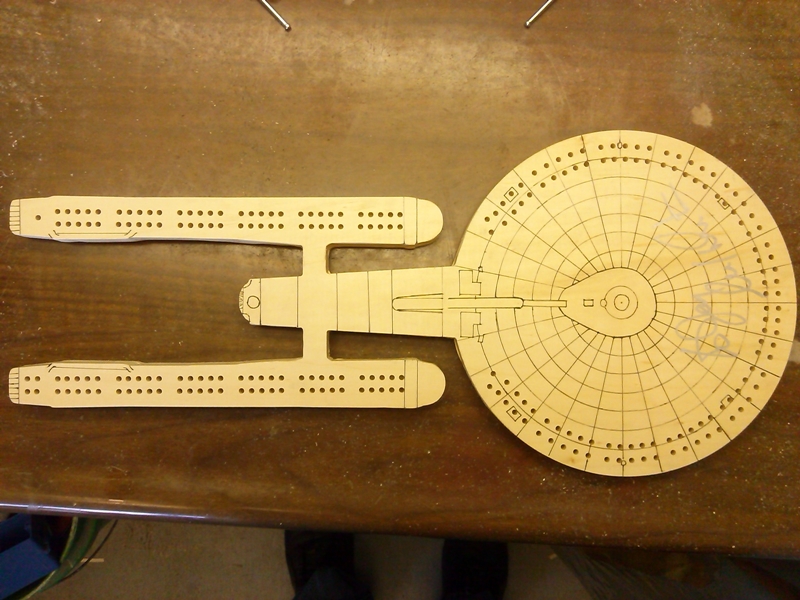 Sterling wrote:
Then removed the papers and went over the lines using a ruler, compass and micro-ball pens.


Have you considered mounting a plotter pen in your machine chuck?

Andy...that is amazing! I never thought that was possible! Truth be told, I build my CNC from a booklet a friend hand. Much of it is made out of wood, with the router (a Bosch palm) strapped to the gantry with hose-clamps. So, no way I could achieve that type of precision! (Maybe I can make enough cash this year where I could afford a Rockler Shark)