Introduction to the Robot Bartender

I'm working on an oddball project and I wanted to start a thread with it's background so people know what I'm referring to when I ask questions... 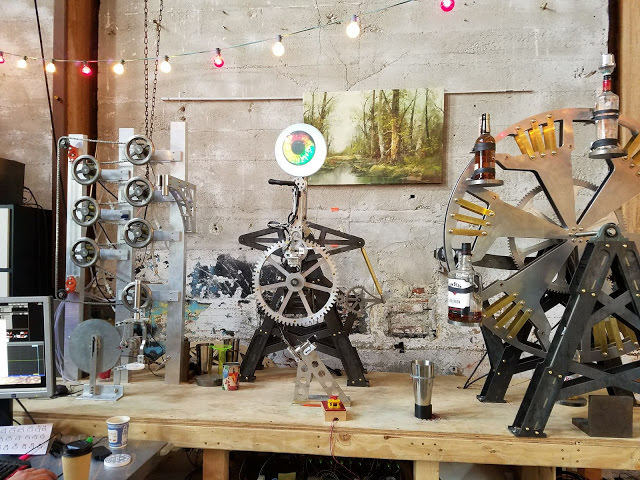 It's got 3 stepper motors that control an "arm" with a pneumatic gripper. It can pick up and move around a slightly modified cocktail shaker. It's got a Ferriswheel of Booze that spins around and selects the booze to be poured into the drink. It's got a tipping mechanism to do the pouring. It can then hold the shaker under a spigot where some peristaltic pumps can dispense mixers. It hands the shaker off to a shaking mechanism that gives it a vigorous shake. And finally it pours the drink through strainer into the waiting glass. There are some show elements that give the robot some character. It's got a spherical projector as an eyeball that we can control and show gifs/videos in. The eyeball is on a structure that can lean to the left and right, and it's got a bowtie that can spin around as it needs to.

Right now we've got 7 geared NEMA23 steppers running most of the elements, and a smaller stepper for the bowtie. We're very pleased with their operation so far. They have enough torque to move things around at a pretty good clip without skipping steps, but not too strong so as to be finger-mangling. They're being controlled by 3 separate Arduinos running GRBL. This is the part that we need to upgrade. Every now and then we get some odd glitches. The timing can drift between the Arduinos if one is velocity or acceleration limited, while the group moves in concert together. At the moment we're just padding with pauses as we need to in order to keep things lined up, but that's not ideal. I've got a Linux machine up and running, and I'm connected to my 7i76e with a 7i85s (to get 9 step/dir pairs).

I'm new to LinuxCNC and FPGAs, and my Linux skills are lacking in general. I've got some co-workers for support with the Linux, but we're all in the dark regarding Mesa boards and how to set them up.

The kinematics of our system is very straightforward. Everything lives in a single plane. I'm hoping to get the robot set up and running with a full kinematic system of control so we can put lots of emotion and personality into the movements. The goal isn't just to pour a drink, but to do it with flair.

I don't think you need to worry about actual kinematics. Just treat XYZABCUVW as independent actuators.