Less More
23 Dec 2020 18:31 #192997 by ChrissyAG
KRV2000 CNC Conversion was created by ChrissyAG
This is my first post on the forum, so I thought I’d share our (mis)adventures with our current project(s).
We shut down our engineering business 3 years ago following my partners illness and we both now want to dabble with machine tools again, so are keen to CNC retrofit a milling machine for disabled use.
Earlier this year we purchased a new (to us) 1996 KRV2000 mill to replace our RF45 clone (Chester Superlux) we had from new in 2012. The RF45 clone was great, but after much consideration we chose not to go with converting the RF45 because it just didn’t have enough travel and was not rigid enough for what we wanted. We did consider a “small” bed mill like a SMX2500, but it would have needed to be disassembled to get it in the new workshop, and would have been too big anyway.
The plan is to do a CNC conversion on it with linuxcnc 7i76e/7i85 combination. The machine was tested and then stripped for cleaning and maintenance. Apart from new brake shoes and a single spindle bearing it was in pretty good shape.
We have called her Matilda and she was filthy. In a backlash to this we decided on a ‘force you to clean it’ white paint job!
The entry door on the column was modified to take an enclosure for the two vfds (one for spindle one for coolant motor). The coolant system has now been relocated externally after the incredibly unpleasant task of cleaning the sump – which we have vowed never to repeat – ever!
A new controller box has been made from an old van vault which has been resized and welded to bolt onto the side of the column to replace the original and give plenty of space for the controller, PC, servos and contactors etc. An overhead arm is currently being made to take the monitor, mouse and keyboard, along with an emergency stop and eventually a pushbutton power drawbar as an additional project.
Our lathe had a drip feed system that worked very well which has recently been upgraded to use the original single phase coolant pump and reservoir supplied when we bought the lathe new in 2014 (which drowned everything and then didn’t drain) with a SCR chopper circuit to control the flowrate. It now works pretty well for what we want, so we decided to use something similar for the mill.
The electronics are currently on the test bench. We went with Lichuan servos purchased on AliExpress from the manufacturers shop and have replaced the original Huangyang vfd that we used for the conversion to single phase with a Nflixin 9100 that outputs 380v 3 phase which is now being used on the test bench while the HY is used to get the mill up and running again manually so we can machine parts for the CNC conversion. We are running Debian 9 with linuxcnc 2.8.0-95, and have had quite a bit of success with the controller which is currently controlling spindle vfd, servo motors and limit switches etc successfully, and have got familiar with probe basic GUI and have been impressed so far. 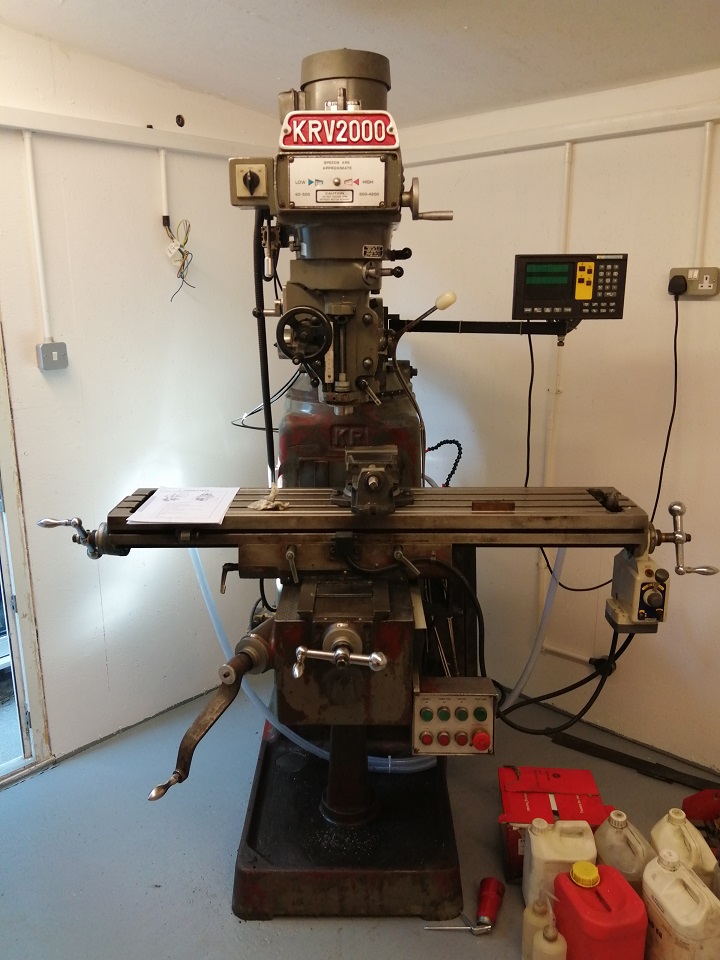 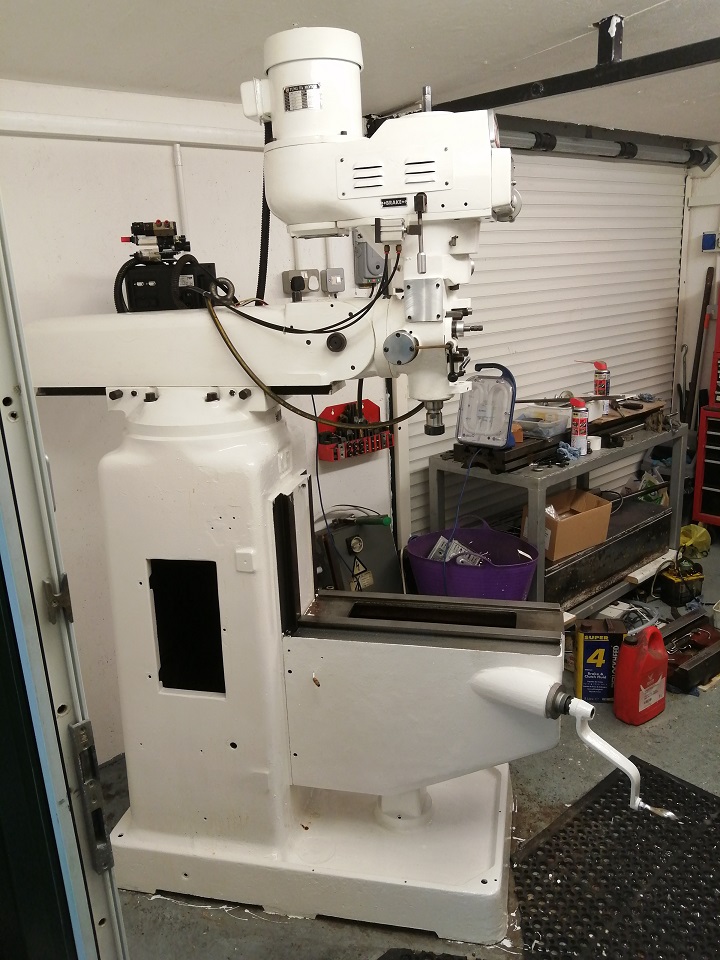 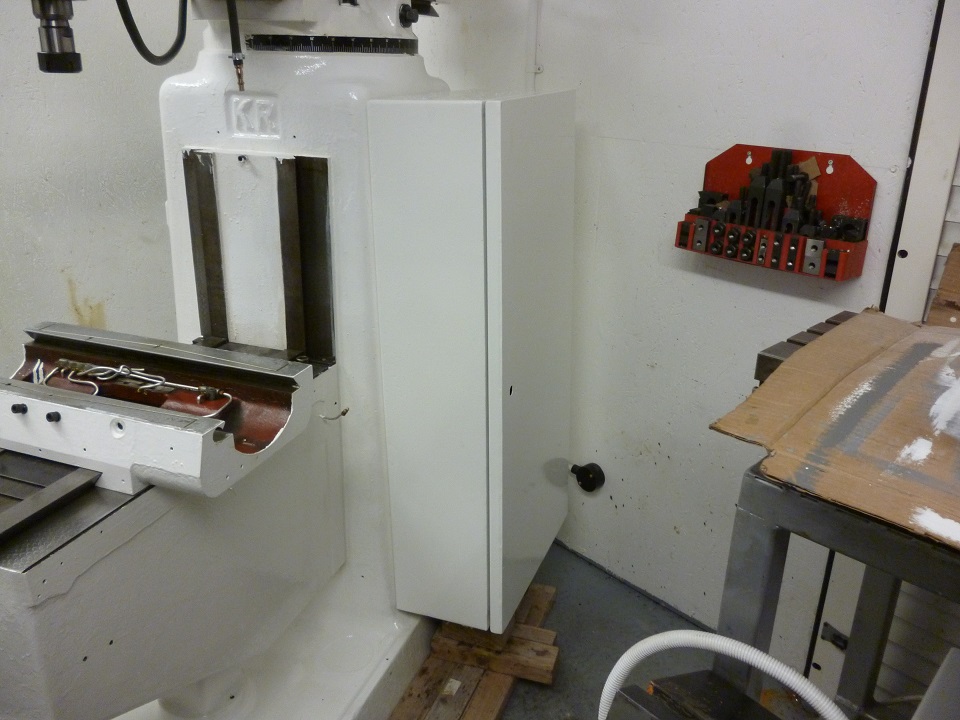 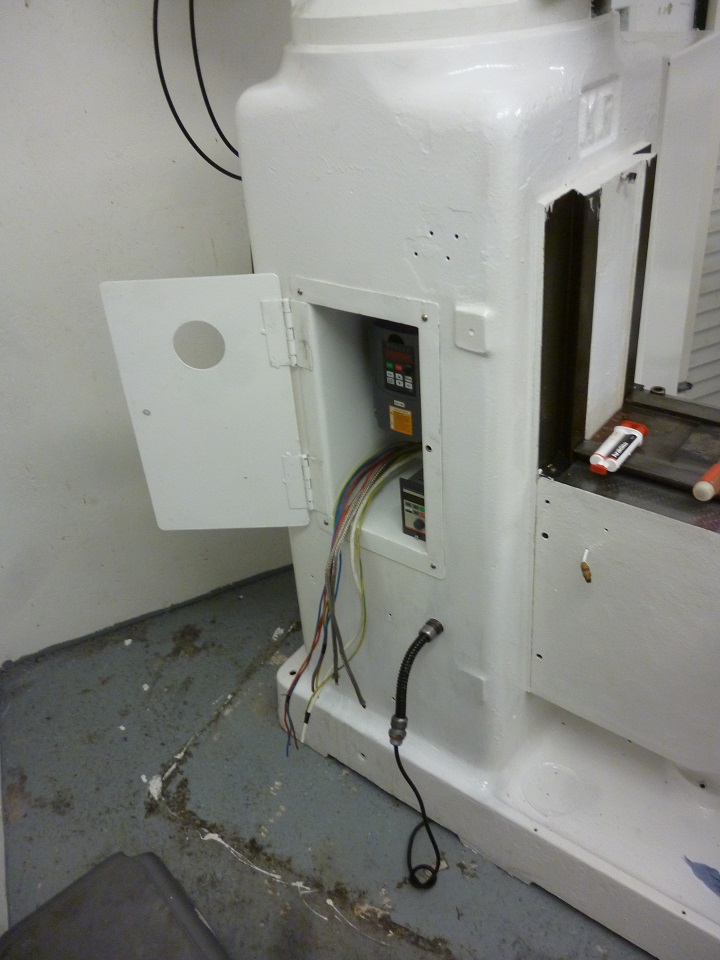 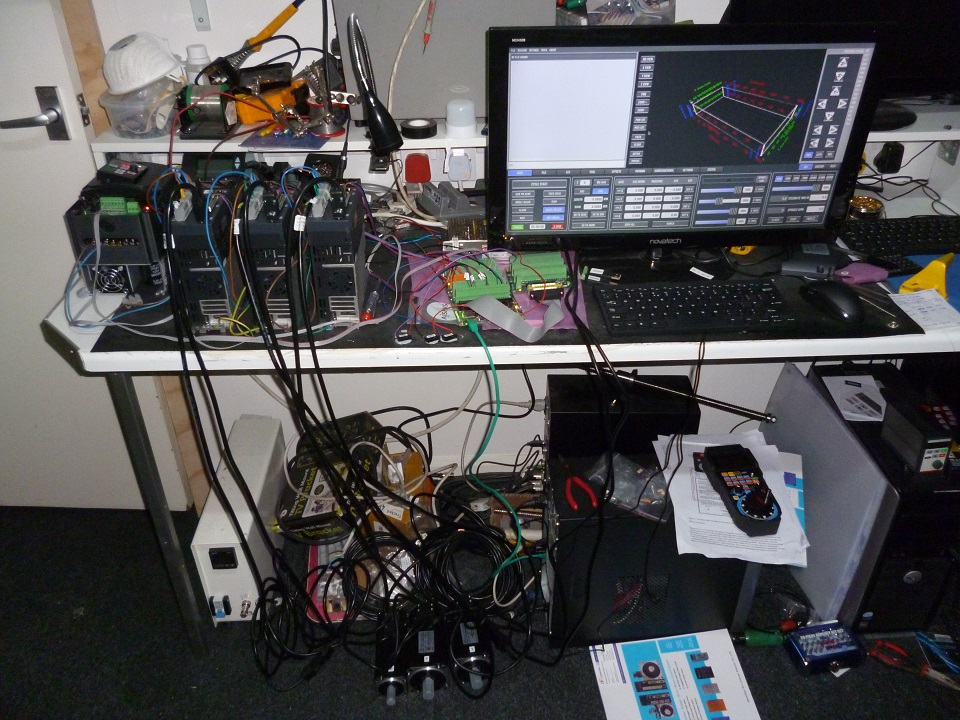 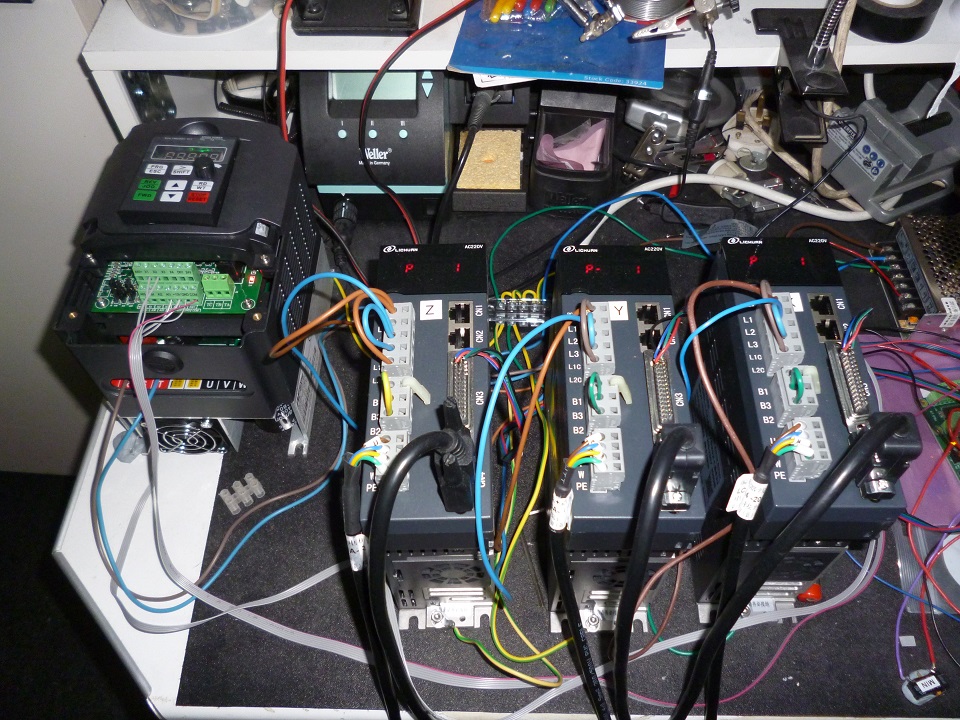 This is our first adventure with Linuxcnc, having only had experience with Mach3 and others on other machines we have built in the past, so get the popcorn, this may be tricky!
The following user(s) said Thank You: tommylight, rodw

Less More
24 Dec 2020 13:32 #193109 by tommylight
Replied by tommylight on topic KRV2000 CNC Conversion
Mental note to self: check if there's enough popcorn in the cupboard above the microwave !

Thanks for reminding me, last i checked was 3 nights ago.

Less More
24 Dec 2020 20:15 #193144 by ChrissyAG
Replied by ChrissyAG on topic KRV2000 CNC Conversion
Few pics from earlier this afternoon, its a bit cold out in the workshop. Progress on the boom arm for the monitor, keyboard etc which is currently tack welded for mocking up prior to being welded permanently. The boom arm at the front of the mill sits lower than the lowest part of the ram to maintain the original machines flexibility with the turret. The idea is to thread the wiring for the keyboard, monitor etc through the box section to keep everything neat. The original electrical panel will be mounted on standoffs welded into the new control box along with a long thin panel to mount the servo drivers, Mesa boards and 24VDC PSU, and a cut down old PC case that serves as a carrier of the PC motherboard and PSU. Further updates in a few days.

We will probably be spending the cold snap with festivities and in mortal kombat with a pesky MPG! 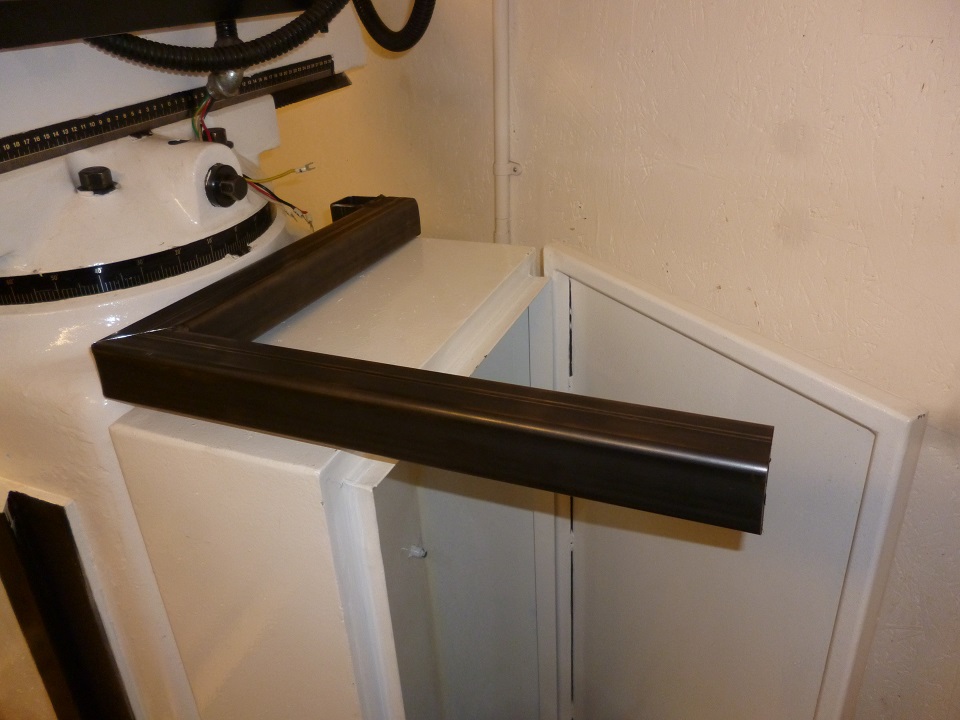 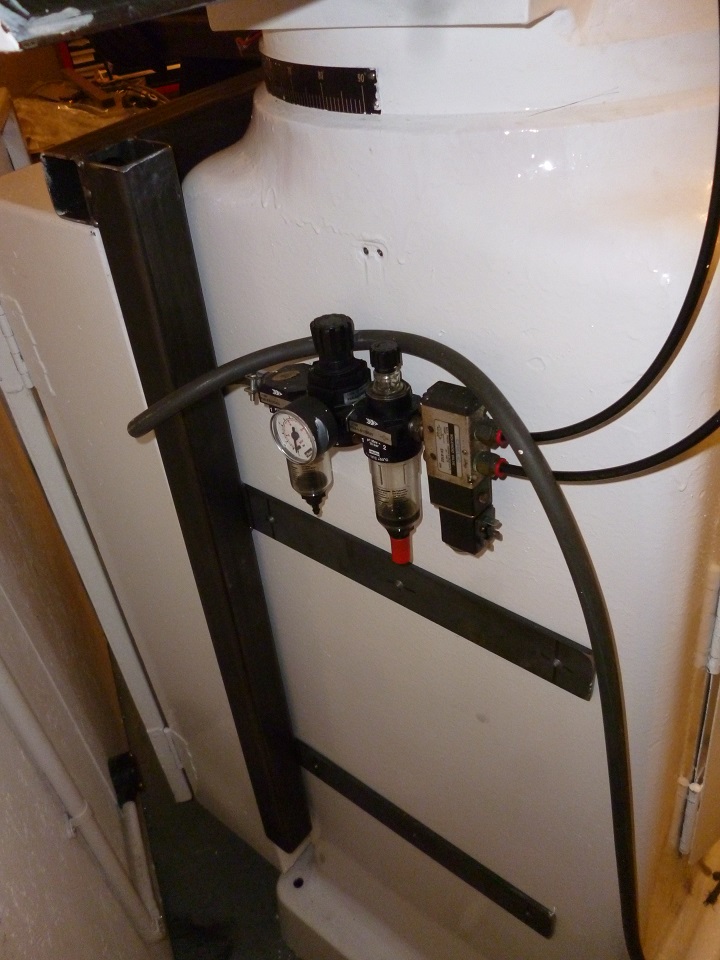 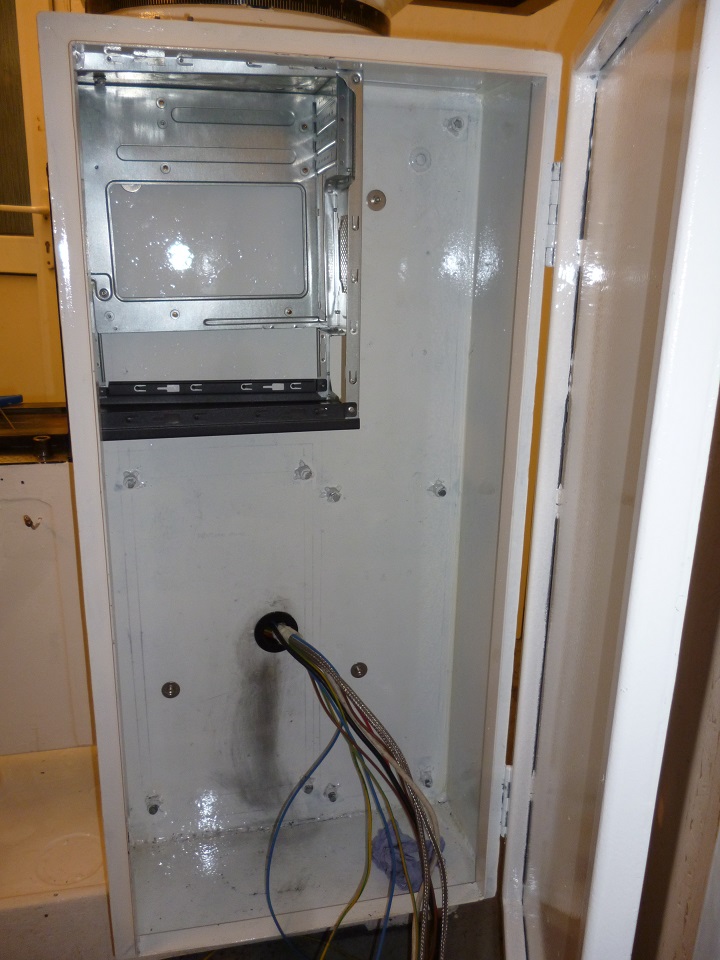 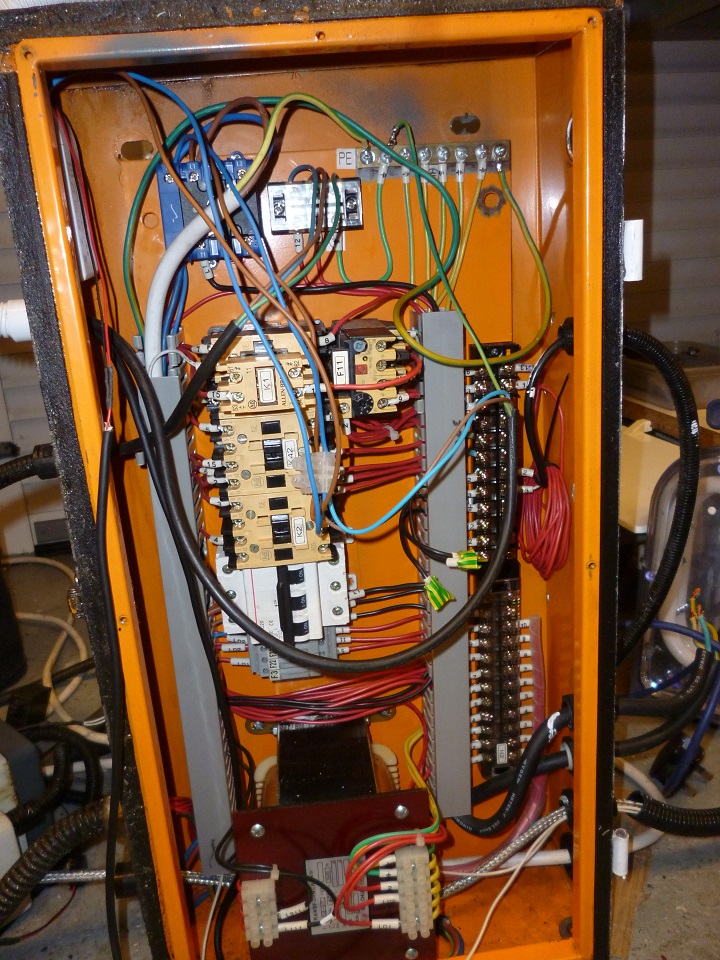 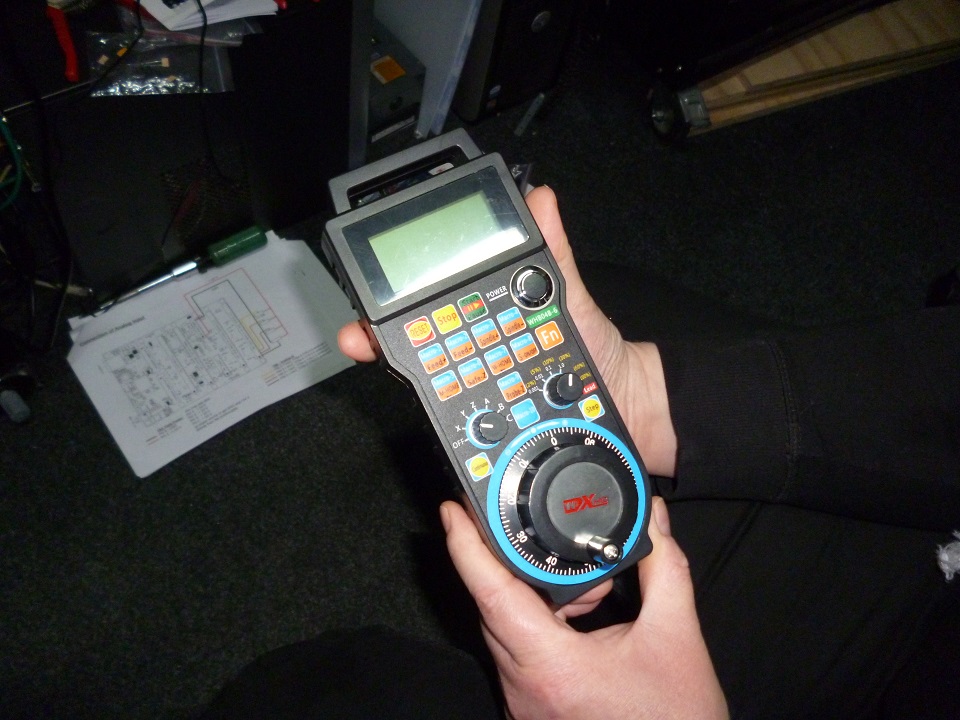 Merry Xmas to all at Linuxcnc forum!

Less More
27 Dec 2020 23:57 #193323 by ChrissyAG
Replied by ChrissyAG on topic KRV2000 CNC Conversion
Despite this being our first time using Linux for anything, we have managed to get most of the control system working. However, we recently purchased a xhc whb04-6 pendant and have been trying to integrate it into the rest of the setup. This has been a bit of a nightmare – and I think we might need some help here.

We followed the instructions by talla83 as per LinuxCNC 2.8.0 & XHC-WHB04B-4 - Inbetriebnahme wireless handwheel -https://www.youtube.com/watch?v=e2DjkzCq7R4.
Run in command line:

and all buttons work including the handwheel encoder.

As per alkabal’s suggestion I also run 2 terminal windows:
One with:

This shows that the buttons (although not all are listed), the scale and axis selection work but curiously the jog counts always stay at zero. Is this normal? As the previous method by talla83 shows the encoder wheel works.

Using axis sim and inserting the whb04b-6.hal file into it’s folder and adding the HALFILE in the axis.ini, the mpg also works fine as far as linuxcnc software can see it and shows movement on screen.

After running several experiments, it seem that 3 lines of code about axis-select-<n> already being linked to halui.axis.select.<n> always cause a problem. I have tried hashing them out in the MPG hal file so that Linuxcnc starts up but the encoder wheel is disabled. I have tried numerous modifications to these lines in an attempt to make the encoder wheel work and have dedicated many hours of trying and have exhausted everything I can think of including suggestions on this forum.

I am wondering whether this can actually work for a real setup that isn’t a simulation, that the software driver for the pendant doesn’t fully work for whatever reason (I was short quite a few dependencies initially which now appears to be solved), or that I’m missing something so obvious it borders on dumbassery.

This is kind of a deal breaker on this project, as it is meant to be a key part of a cnc conversion. We don’t want to use a different MPG as this one has loads of functions that we can later program to do subroutines eg a toolsetter, probe etc, and a hardwired one would take up loads of inputs on the 7i76e, and also compromises some safety aspects of the build, despite introducing some latency which is manageable.

This is where you guys come in – I am now out of my depth here. Is there anyone out there who knows how to make this work and is willing to help me?

This is not the first cnc conversion we have done, but it is the first with linuxcnc. We are using Debian 9 and Linuxcnc 2.8.0-95 and probe basic as the GUI.

I have attached my ini, hal and mpg hal files for you to check and give comments, which hopefully will get me back on track.
Any help or suggestions would be greatly appreciated.

Less More
02 Jan 2021 12:50 #193837 by ChrissyAG
Replied by ChrissyAG on topic KRV2000 CNC Conversion
Ok, assuming I have understood what you have suggested, I have tried the following:

2. Tried in Matilda001.hal hashing out
net axis-select-x halui.axis.x.select
result is still no joy with encoder wheel

When I have tried modifications to the hal files, I have opened the hal configuration window to watch for jog counts.
pdnt.axis.x.jog-counts
in signals section never displays any counts despite
pdnt.axis.x.jog-enable
and
pdnt.axis.x.jog-scale
functioning correctly.

I cant help feeling that I am being totally stupid and missing something obvious.

Less More
03 Jan 2021 00:02 #193905 by Benb
Replied by Benb on topic KRV2000 CNC Conversion
Don’t feel bad the pendants interface is a tough one. If you search the forum you will discover that you are not the only one having problems with pendants.
Now back to the problem you are having.
Comment out in matilda01.hal #net axis-select-x halui.axis.x.select net pdnt.axis.x.jog-counts whb.axis.x.jog-counts axis.x.jog-counts
This part is correctly configured, and you should see activity if driver and hardware are working ok.
Are you using halscope? if not try it, its much better at monitoring pulse trains.