Less More
21 Oct 2020 20:54 - 21 Oct 2020 20:54 #186838 by helioz2000
Replied by helioz2000 on topic Raspberry Pi 4 with Mesa 7c81
Progress Report:
Yes, the project is finished, that is the machine has been fully operational for a few months. It's never really finished as there's always something to improve and refine. At the moment I'm replacing the ACME screws with Ball Screws but I'm using the mill to make the components for that part of the project.

The Pi4 with the 7c81 works flawlessly, hasn't missed a beat. I can recommend this combination.

rkh wrote: I'm also going to be giving this a shot. Does anyone know more about options for breakout boards? I wasn't feeling too confident about the generic Mach3 BOBs I saw, so I've got a C10 from CNC4PC on the way - hoping this would work but not sure if things will need to be remapped at all or not. I also saw Mesa has the 7i78, but that's not specifically listed in the 7c81's support archive. Anyone know if I could expect that board to work OK?

Personally, i started using the typical chinese bob, which worked fine had that running for like 5-6 months, just confused my self with DB25 pinout to IDC26 pinout, not the c10 but i think pinout is the same you should double check, now Im using the 7i76 and it also works flawlessly, I just had to load new bitfile but that came with the archive.
I also bought a 7i78, but ive been busy with this 7i76, that I havent tried it out yet. Just checking now, there appears to be no stock bitfile for it in the archive, and everything else has different pins


which leads me to my segway, I need to start using my smartserial ports, but I have a mounting setup similar to helioz2000, with mine made even bulkier because i really want to use 4 solid standoffs, so the ribbon cable/connectors are in the way, not to mention makign my overall height profile huge. unbelievable RPI foundation would keep using this hole pattern for the last 8 years. Ive been working on a few easy test boards i can make with through hole boards, might have wrecked one 7c81, i reversed all the pis, so pin1 was pin2, pin 4 was pin3, so 5v was 3v, so i hope i dont wreck it too bad, now Im tired of inbetween fixes and want to make my finial version of the adapter board, and I am pretty close, but Im not an electrical eng, so ive been afraid to pull the trigger and my apologies for using easyeda
.
easyeda.com/cakeslob/test1_copy 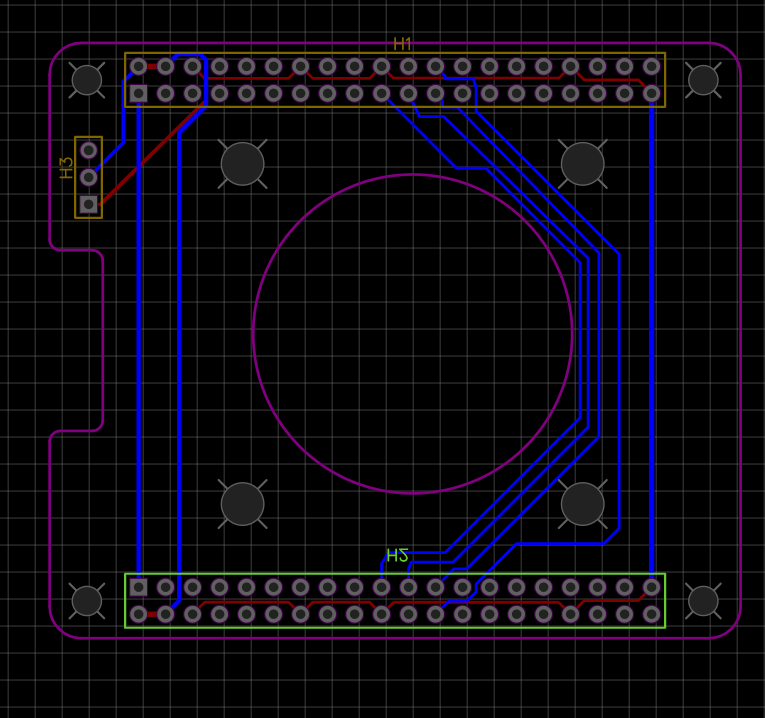 basic idea, its a mirror board, so you can plug it into the 7c81 normally, and then turning the rpi upside down and plugging it into the adapter board , so it has 2 female headers, one pointing up, the other down so they can both plug in, and then i mirrored the pins, and then just a fan cutout in the middle. I didnt route all the pins, I didnt think I needed to. This would ideally make a clean sleek setup and be able to use all 4 standoffs. If anyone can provide input on to what I am not doing correctly, or pin routing or trace width , or if the fan will interfere with spi signal, or if smd headers are better than throughhole for trace routing, or some feature to add, anything really, then we can all have nice 4 standstandoffs supporting the pi