Less More
06 Sep 2019 11:13 - 21 Mar 2020 03:44 #144367 by rodw
Hypersensing with THCAD - better way to do ohmic sensing was created by rodw
Well it was PCW's idea and in the interest of full disclosure, he donated the newly released THCAD-5 for these experiments. Peter's hypothesis was that it might be possible to calculate the resistance in an ohmic sensing circuit from the voltage loss measured by a THCAD when the torch shield touched the material. The THCAD is rated to handle overvoltage to 500 volts and totally isolates the dangerous high voltage side from the electronics. So the theory was to have nothing in the circuit other than the THCAD, its scaling resistor and an isolated power supply. Meanwell have a well priced power supply that is also rated to 500 volts isolation so we figured that we did not even have to turn the power supply on or off to protect the circuit.

But hang on, how were we going to add an extra THCAD to a 7i76e that only has one encoder input? Well an encoder input has an A input, a B input and an Index input. The THCAD requires an Encoder A input. I asked Peter about this and he said he had been thinking about making new firmware that included two more encoder A inputs on the B and Index pins. I reminded him he had already done half of the job because he'd placed the encodea A input on the B input for me after I smoked a THCAD and the input it was attached to. So sure enough by the time I got around to wiring some stuff up in a temporary fashion, Mesa had released new firmware for the 7i76e and the 7i92 with 3 encoder A inputs. These bit files are available for download from the Mesa website and their file names end in "pl.bit"

So the first attempt was a bit of a failure so we regrouped and with a bit of coaching from PCW, we came up with a workable circuit which is outlined in a PDF file attached here. I settled on a 390k scaling resistor which gave a full scale of 24.5 volts on the THCAD-5. I deliberately set this a bit higher than the 24 volt power supply I used and figured if we saw a full scale voltage, the arc was on.

I then wrote a component that had an output pin that could be set at an arbitrary threshold and I chose 18 volts. When the voltage exceeded the threshold, it turns on a pin that is attached to the Linuxcnc probe input .

Now I could see what was going on. So I pushed a wire on to the table by hand all I saw was 24 volts. This was a bit disappointing but then I decided I might as well connect it to the torch shield via the Ohmic clip and see what happened if I approached the table in 0.01mm (0.0004") increments with the jog wheel on my pendant. This then showed what PCW was hoping to see. The voltage went from 0V, 12V, 18V, 24V over a 0.04mm (0.0016") movement!

So at this point with wires hanging everywhere and the power supply plugged into a separate power point, I decided it was time to give it ago on a test job with 110 pierces 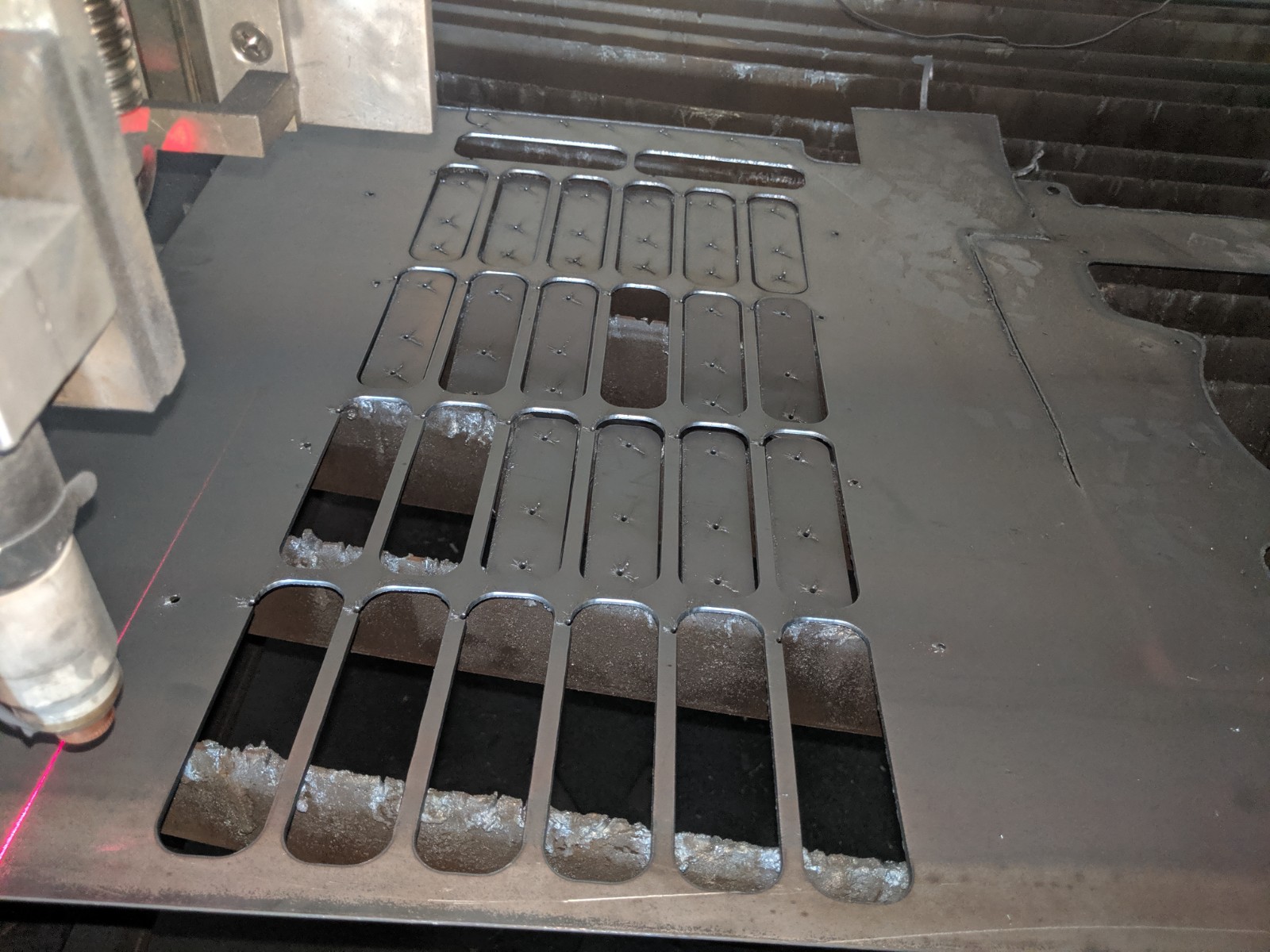 And it worked! I could even see when the arc was cutting! The time Plasmac took lifting the torch up in hte final part of the probe seemed to be much faster. I think this must say that the THCAD is triggering the probe much faster than a laggy relay.

So now with a bit of thinking about it, I decided to call in on a mate I knew had a variable voltage power supply and test one of the 24V opto isolated relay I was using for ohmic sensing. We found that it turned on at about 7.5 volts and off at about 5 volts.

So then I thought about it a bit more and decided to add an off threshold to my component. So now we could set the on threshold up around say 18 to 22 volts and the off threshold of 1 to 5 volts. So this had to give really good switch hysteresis so there was no chance of a false trigger.

So then I needed to tidy a few things up like the wiring and the component
Somebody suggested that on a water table if an ohmic sensing circuit was powered all the time, it could lead to corrosion of the torch consumables so I added the blue AC relay just because I had it lying around. So it just turns off the mains feed to the power supply if its not needed. 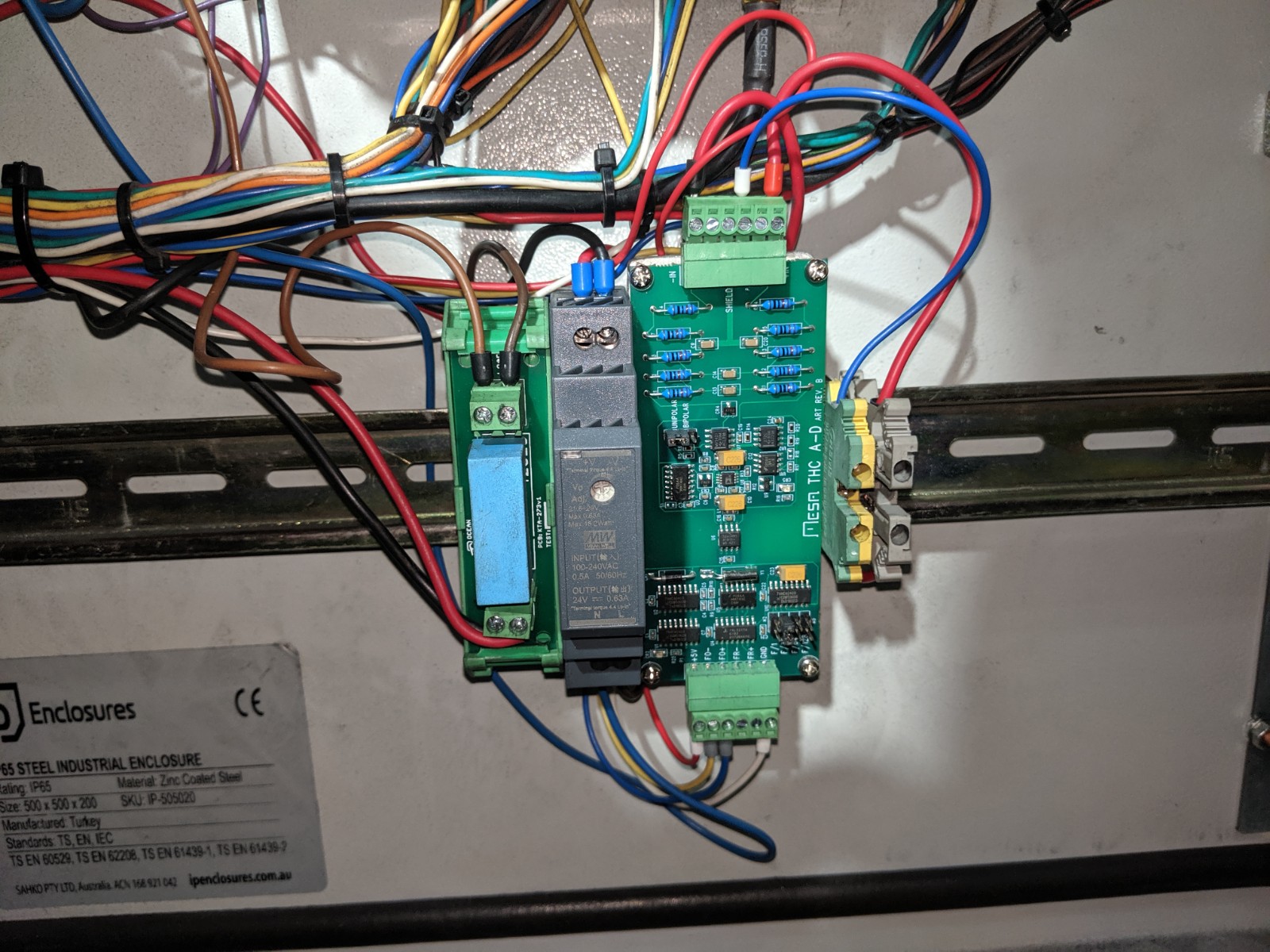 I decided to mount the scaling resistor in a DIN rail terminal block which made things fairly neat. 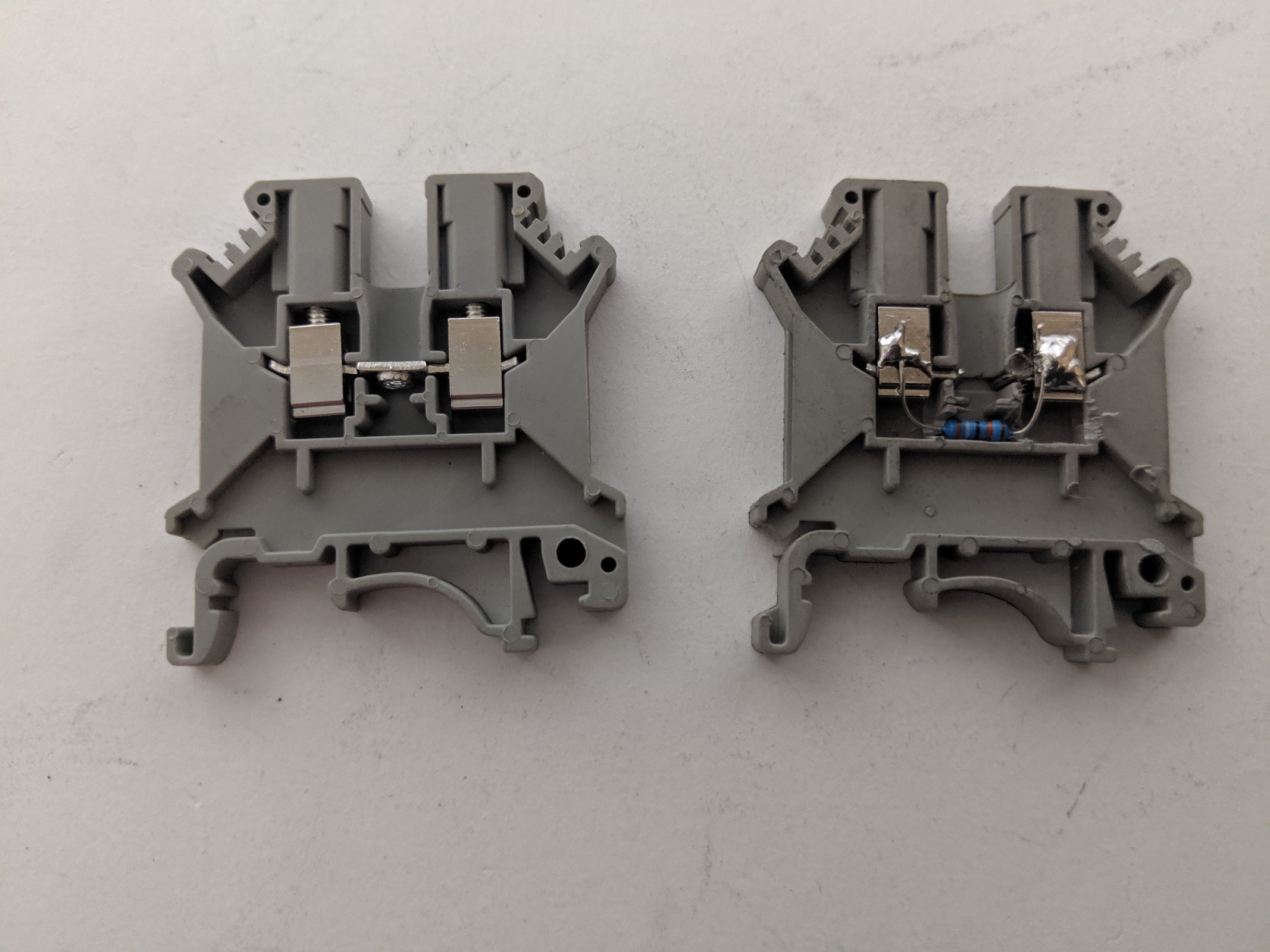 So in summary, why bother ? Well as I stated elsewhere:
1. Costs are not significantly higher than a relay config
2. Much simpler circuit, no need for diodes to protect from reverse arc voltage
3. no voltage loss
4. Instant sensing for faster and most accurate sensing.
5.no relays which are often quite slow to respond (have a look at the opto22 specs for example)
6. bulletproof in relation to arc voltages,
7. High noise immunity due to the THCAD design
8. Logic circuit is decoupled from the noisy plasma environment so no possibility that the ohmic sensing wire being used as an antenna to introduce spurious faults in a HF environment (eg 200 amp and above).
9. precise sensitivity adjustment

I have also attached a sample hal file. Just add it to your ini file after the other hal fies and it will unlink a few signals and set up the hypersensing probing


Phew, what a mission that was sharing the journey!

Less More
06 Sep 2019 11:31 #144368 by thefabricator03
Replied by thefabricator03 on topic Hypersensing with THCAD - better way to do ohmic sensing
I cant wait to give it a try.
The following user(s) said Thank You: rodw

Less More
06 Sep 2019 22:45 #144426 by GradeMind
Replied by GradeMind on topic Hypersensing with THCAD - better way to do ohmic sensing
Very nice - it just keeps getting better.

Instead of 2 THCAD boards could you use a relay to switch between inputs (ARC volts monitor or shield probe circuit) ?

Instead of 2 THCAD boards could you use a relay to switch between inputs (ARC volts monitor or shield probe circuit) ?

Thanks, I don't think so because you would be contending with switching the torch voltage and different full scale readings.

What are the pros/cons of using the optional relay? Finally, any reason you have the relay on the AC side of the psu rather than something on the DC side, maintain isolation?
Last edit: 17 Dec 2019 02:31 by AgentWD40.

The isolated PSU means using a single PSU just for the Ohmic circuit.

Rod has mentioned to me in a email that the optional relay was not necessary after some testing he did.
The following user(s) said Thank You: AgentWD40