Less More
11 Nov 2019 21:08 - 11 Nov 2019 21:35 #150155 by J Green
Replied by J Green on topic Retrofitting a 1986 Maho MH400E
Brad
I was wondering if the external 5 volt supply is a switching or a linear type power supply?
While the TNC is on the bench , could someone check -- the sweep frequency --- video signal levels that go to the video monitor ? Would be useful if the monitor is up graded to a LCD type.
-- the voltage going to the LS 403 scales from the TNC X-Y Z connectors. Think pin 4 =Com an pin 3 =+ 5 volt DC , Please ask Mark or db1981 to check which pins as I may not remember correctly.
Any thought of while at the bench to emulate some of the MAHO signals to see if the TNC will progress further thru the boot up sequence ? db1981 has provided a digram of the signals .

During the MAHO down time, any thoughts on replacing the old DC caps ___ in the Indromat 3 TRM 2 _ the MAHO 24 volt DC supply? _ the monitor?

Remember that back in the 1970s or 1980s IC chip manufactures tried using aluminium bonding wire vers gold , what a disaster that became. Could the replacement eproms be New Old Stock with that bonding wire mess up?
Last edit: 11 Nov 2019 21:35 by J Green. Reason: Added almuinum bonding wire thought

There are 2 x 5V rails, arme they both checked ?
The following user(s) said Thank You: J Green

Less More
12 Nov 2019 08:30 #150177 by RotarySMP
Replied by RotarySMP on topic Retrofitting a 1986 Maho MH400E
OT - yesterday I decided to do a video review of my power scraper, as there is next to nothing about the Coborn on the web. Just one thread on Practical Machinist

Given that this is S/N 1817, they are probably pretty rare beasts.

Less More
12 Nov 2019 09:45 #150178 by chris mcm
Replied by chris mcm on topic Retrofitting a 1986 Maho MH400E
I will have to wait for Brad to confirm. He is busy with other commitments. I am again using the Maho but it would be nice to have the D.R.O. working. The other TNC features I have never used. I don't believe they have ever worked since I owned the machine.
At this stage, am I better to start the retrofit (as done by Mark) rather than waste time and more money on the Heidenhain TNC 135. As I see it any obsolete spares are going to be second hand or if off the shelf thirty years old. I see this as an ever continuing problem. Re Marks last message. I / We can start the retrofit and keep the machine running as a manual Milling Machine. Do I really need a CNC milling machine?. At my age maybe not. I have learn't some Auto-cad in the past. I am interested and the proposed system will be more reliable.
Using the machine today reminds me of some past problems I had experienced with the Maho.
The control console is too far away from the spindle. This makes setting up the work central to the spindle difficult. When tool changing it is difficult to hold a heavy facing cutter and operate the tool change switch. May be OK for a young person but I find it hard. Seems a control pendant would be helpful. I don't see it listed as a Maho optional extra. I can't believe the Maho designers got this wrong. Maybe it is the way I am using the machine.
One more thing. When using the power feed you press the direction and then the black button on the lower right of the Maho controls.
My question, how can you change direction of the feed (side ways) without stopping the spindle?.
Again, Thank you all for your help getting this fine example of German Engineering going again.
Cheers Chris

Less More
12 Nov 2019 10:11 - 12 Nov 2019 10:13 #150179 by RotarySMP
Replied by RotarySMP on topic Retrofitting a 1986 Maho MH400E
So do you only ever use it for cutting in straight lines, one axis at a time? You don't have to learn Autocad to use more of the functionality of a CNC machine. For simple jobs, I'll often start with a sketch, and peice of paper and write the Gcode program by hand. Being able to use G2/3 to cut curves and helix is already quite a step up from a manual machine. From there you can learn the canned cycles like peck drilling which also greatly improve the usablity. I'm not sure what the canned cycles in the TNC are, but the Phillips 432 had a very good reputation for used friendly and comprehensive cycles. The LinuxCNC equivilent is the NativeCAM plug in.

Would it be expected that the DRO indications should work without the TNC up an running? I doubt that, but am just guessing. It would seem there is no reason to doubt the function of the encoders, it is just that no-one is reading them as the TNC is down. 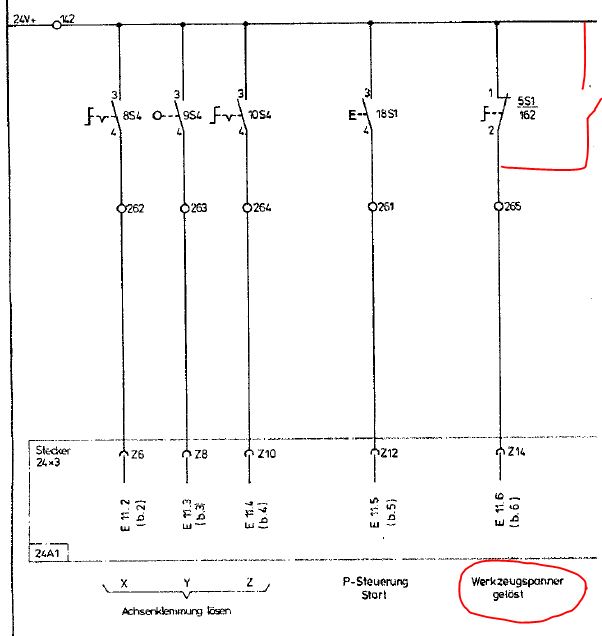 Basically just add a switch between pins 265 and 142. Something like this Industrial foot switch

If you retrofit this, you will have some things to deal with which I didn't have to. For example, I didn't have to give LinuxCNC control over axis brakes. The MH400E only has one of Z, and it's release is hardwired. LinuxCNC can do this (it can do just about anything), but you do have to get down and dirty with learning some new skills. If you really just want to use it as a manual machine with a DRO, try and get the TNC working, and keep it working.

€1100 for this four axis machine, including a bunch of tool holders is a steal. That cable salad looks wild, but it was systematically disconnected, and numbered. The original control cabinet is there, including both indramats, the Siemens SImoreg for the Variable speed DC main spindle (like a MH400E2) , central lube unit, hydraulic unit, manuals, wiring diagrams, encoders ballscrews, housing, control module are all there. It was put out of sevice for a failed EXE. You can get 4x 602 EXE's off ebay for about €250 put the original electrical cabinet back together with LinuxCNC and have an excellent mill. Looks daunting, but is actually way less work than converting a manual mill, and has the iron quality to really perform.

It is on a pallet, with a forklift available.

This is as close as you get to a perfect home shop CNC project.

Less More
12 Nov 2019 15:15 #150209 by Glemigobles
Replied by Glemigobles on topic Retrofitting a 1986 Maho MH400E
A quick note about the VGA converter, it was my understanding from doing online research at the time of buying the XVGA box that the signal in my machine was not just CGA. I did investigate the retro-video-game route but for the life of me I no longer remember why I decided against it. Maybe I got some clues from the TV repair guys who tried to fix my fried CRT display, I did talk to them about the type of signal and they seemed knowledgeable in that regard.

Great to hear about the Maho up and running Chris! Even if there's no CNC, it's better to have a useable machine than no machine

Mark, maybe you would consider lending me your power scraper for its selling price next year when I get to work on rebuilding my MH600

Less More
12 Nov 2019 15:20 #150210 by RotarySMP
Replied by RotarySMP on topic Retrofitting a 1986 Maho MH400E
The scraper mostly lurks in a corner under my bench. I am sure we can come to an arrangement once you get into scraping your MAHO.
Mark
The following user(s) said Thank You: Glemigobles

chris mcm wrote: I am again using the Maho but it would be nice to have the D.R.O. working.
At this stage, am I better to start the retrofit (as done by Mark) rather than waste time and more money on the Heidenhain TNC 135.

YES! I converted a manual Bridgeport to CNC in 1997 using an old Allen-Bradley CNC control. It did work, and I'm an old minicomputer guy, so I could keep it running, but it had 3 major breakdowns in 9 months. But, I was able to make amazingly accurate parts with it, WAY better than using the hand cranks and badly worn Acme screws on the Bridgeport.
(I did retrofit high-quality ballscrews as part of this retrofit.)

Then, I got hooked up to the very original EMC project, and made it so I could plug in either the A-B or the PC with EMC.
I did wait a bit for a few kinks in EMC to get fixed before making the switch permanent. That version (1998) had an on-screen DRO, but no graphical representation of the toolpath. I used this until about 2005, when improved GUIs and many other features gave me the desire to upgrade.

While I can use a manual machine, there are so many reasons to go full CNC, I can't imagine doing any serious machining without it. I used to do complex control panels, and one tiny slip-up would ruin the work. Now, I don't worry so much, I can just fix the error and do it over at the push of a button.

Less More
12 Nov 2019 15:37 #150214 by Glemigobles
Replied by Glemigobles on topic Retrofitting a 1986 Maho MH400E
That would be amazing! I will be sure to get in touch with you in a few months when I get a surface plate (by the way, there's an obscure company in Poland that makes and repairs granite surface plates for a very good price, with certificates etc.; the difference between them and most well-known manufacturers is that they use the ISO standard instead of DIN). It would save an incredible amount of time, and the integrated honing wheel is a very good feature as well.