just another plasma build and then some :)

Less More
03 Jun 2020 09:58 #169930 by machinedude
Replied by machinedude on topic just another plasma build and then some :)
i was thinking after the fact that something thicker like wax or paste would probably work better. i still have sections to take off yet i might try a heat gun to see if that might help? something to try anyways won't hurt anything.

i just finished it up this past weekend and only started to rip things apart and am only about half way done with that part. the E.G. is hard to i really nice finish with unless the mix is pretty wet but with the cost of epoxy you are trying to keep things cost effective. well at least as much as possible anyways.

Less More
07 Jun 2020 12:55 #170473 by machinedude
Replied by machinedude on topic just another plasma build and then some :)
started to make things look pretty on the frame and quickly came to the conclusion that sanding by hand sucks on something this big to prep for painting. so i had to order some supplies for the DA sander i have so i can save my arms

this thing is turning into a money pit

i will probably pick up a 5V power supply for this thing soon as well since i don't have one on hand. i have just about everything else since i built the servo controller a while back.

now that summer is here grass cutting and everything else is cutting into built time. i felt like i was going slow before now it's even worse

Less More
07 Jun 2020 13:24 #170477 by machinedude
Replied by machinedude on topic just another plasma build and then some :)
i had another thought. since i am swapping out the steppers for servo's this Z axis is probably going to be pretty scary in terms of speed. i was getting 400 IMP with a direct drive with a stepper. so with the same set up if i run 240V on the servo's i should be around 3 times faster. with such a short axis that's going to work the pucker switch 3 times harder

i think i might end up looking for more suitable coupling solutions as a result.

Less More
17 Oct 2020 03:02 #186341 by machinedude
Replied by machinedude on topic just another plasma build and then some :)
time to get back to this project. i am waiting on about 650 LBS of aluminum for my table top so i figured i would go scope out were i was and decided to clean up for a few hours today and regroup a little bit. it's amazing how bad i can destroy my work space is a short time

i had some issues with the E.G. casting sagging around the ball screw. but after i cast the frame i could no longer get under the frame to get in there to grind the problem area's so i had to jack up the entire machine so i could get to where i needed to be to fix things. the diamond concrete grinding discs work pretty well for cleaning up E.G. but they dust they make gets everywhere

Less More
23 Oct 2020 20:01 #187016 by machinedude
Replied by machinedude on topic just another plasma build and then some :)
i'm a bit envious of you guys with commercial shops with fork trucks at the moment

my shipment is in the area but i have to schedule a delivery appointment with the freight company since i am a residential delivery. would have had the material here already if i was a commercial operation. they never called to schedule so i called them and the person who does that is out for the weekend so i have to call Monday.

it's not perfect by any means but it's good enough for me :)i will work on making the bed flat and finding a way to attach the top sections after i figure out how to hold them so i can cut some t-slots in the 1" thick aluminum top. I'm curious to see how well everything will work once the top is in place? seems like it should be a big step up from the bare metal skeleton i tested some aluminum on before. i put an indicator on the frame after i cast the E.G. and placed everything at the center of the table at the weakest point and got on the bed before to see if things would move and with my 200 lbs i had zero movement from a little bit with just the steel skeleton. one step closer at least 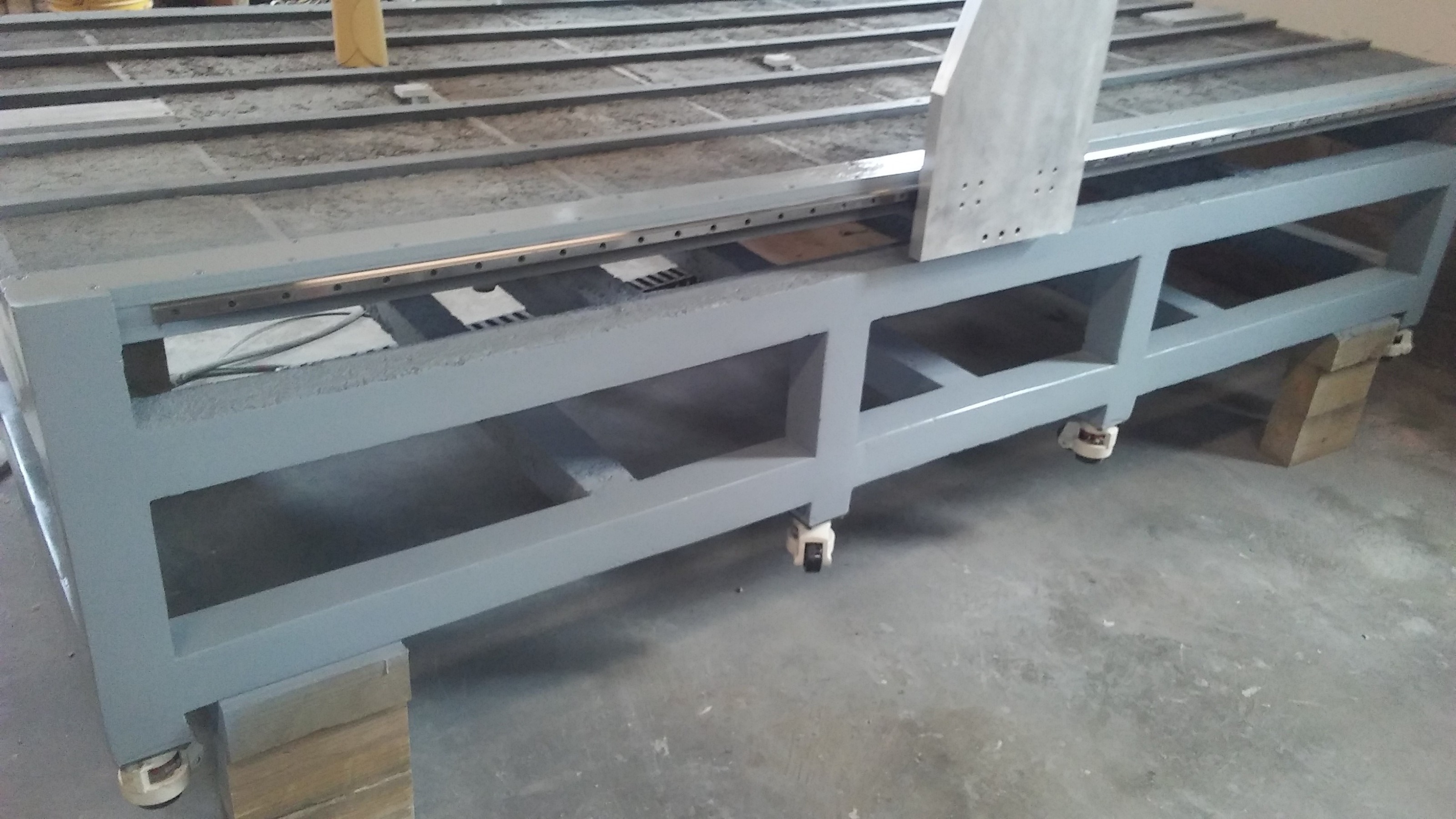 Less More
27 Oct 2020 19:46 #187459 by machinedude
Replied by machinedude on topic just another plasma build and then some :)
probably was a waste of time to set the slats on the bed of the machine but i wanted to see it on there to see the final heights of things so i took the time to do so anyways

starting being the key word here

it's going to take a while to turn these into a t slot top. lots of machining since they are 55 inch long by 12 inches wide and i have 10 of them to do.

now comes the fun part getting things flat on such a big surface :)after that some final trim pieces and probably some chip guards for the linear scales once i get to that point. 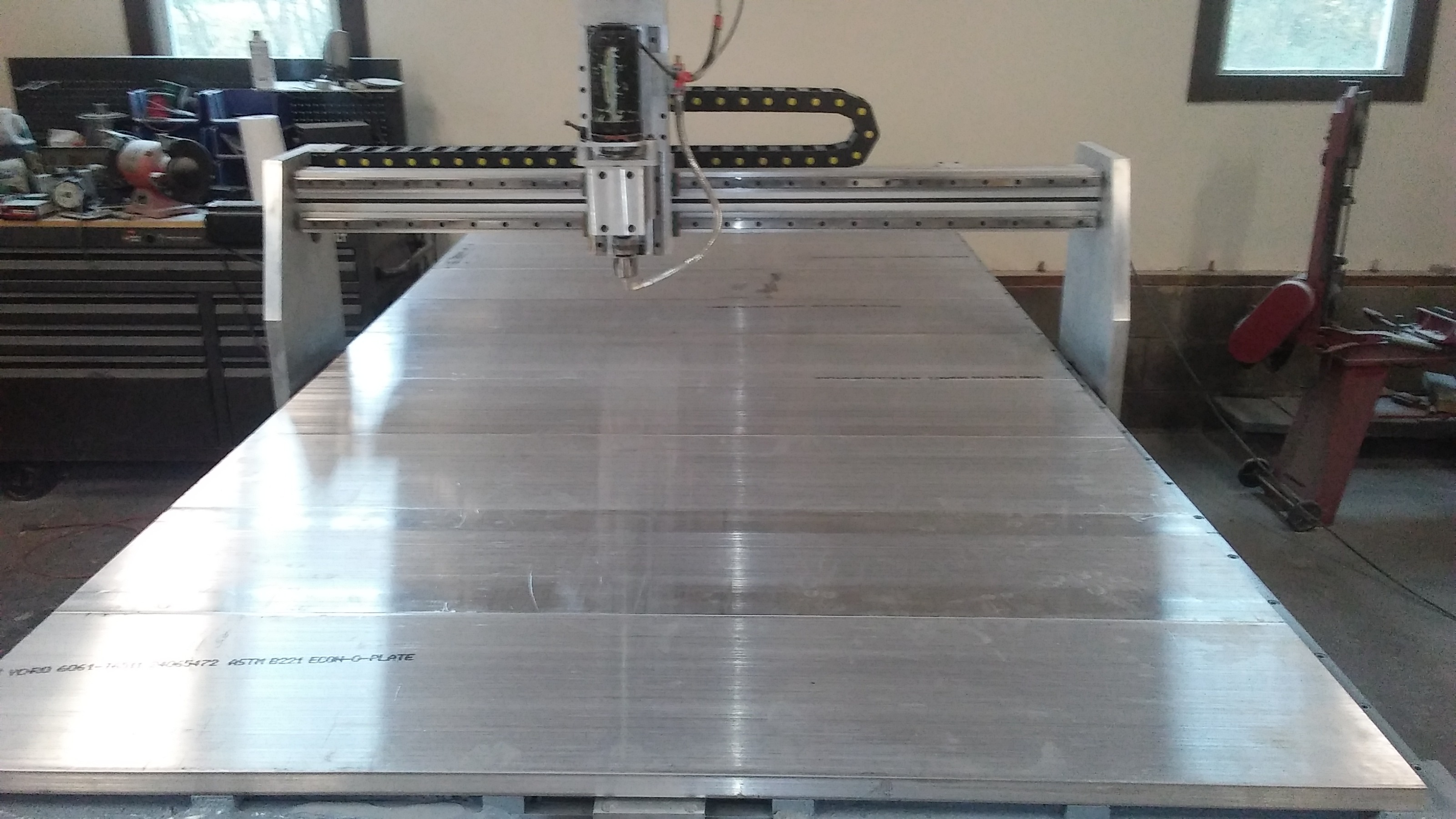 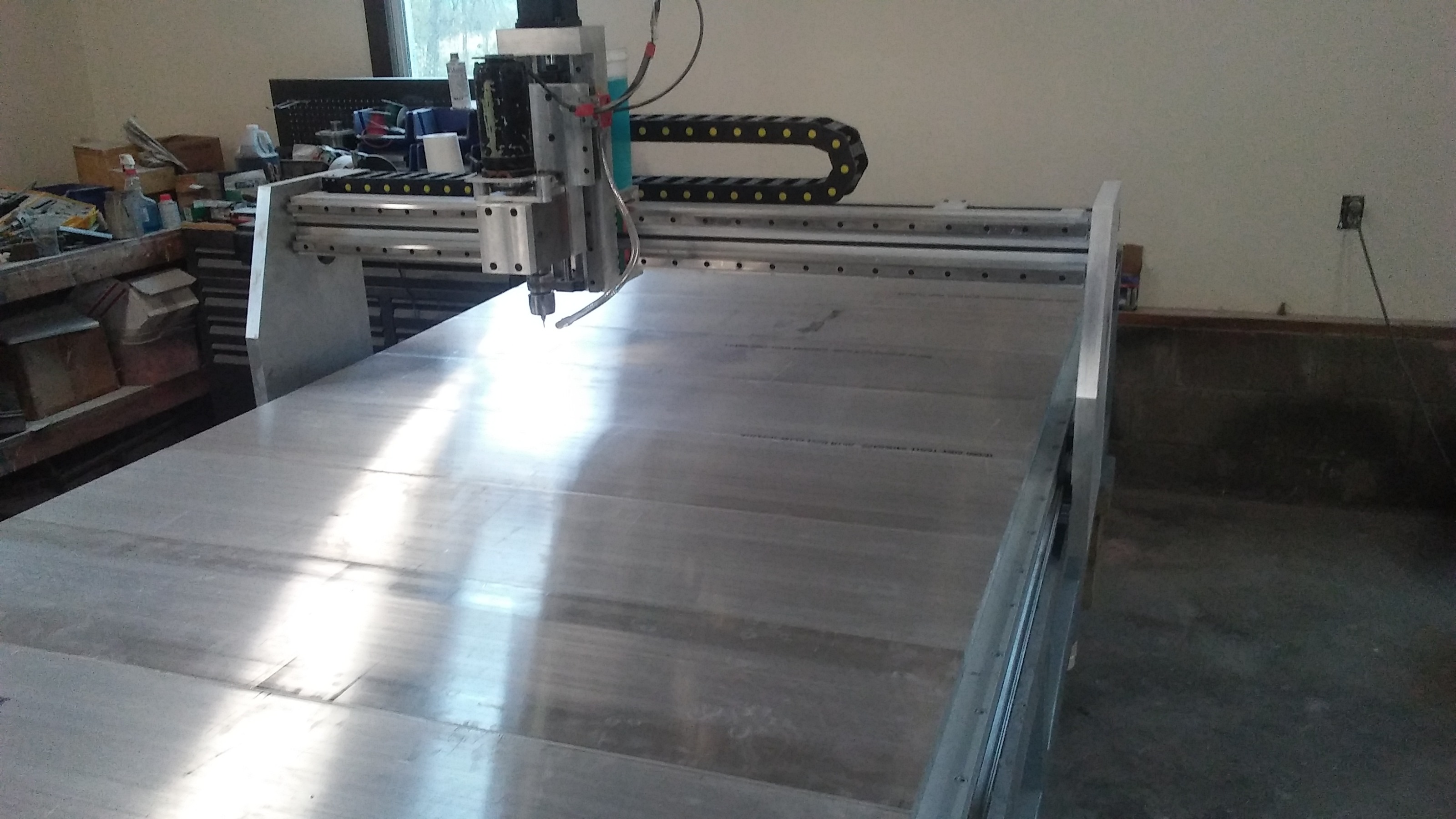 Less More
02 Nov 2020 22:57 #188160 by machinedude
Replied by machinedude on topic just another plasma build and then some :)
this is not really the best test for cutting steel since the work holding is anything but ideal for what i am doing but i will say if the insert is sharp and with the right finishing strategy a more than acceptable surface finish can be had with what i have built. so if i can get this kind of result with hot rolled steel which is not the best material to begin with i think any Aluminum work should be pretty easy it get some pretty good results.

it's getting closer to being flat it just takes some time and effort to get there. with the fly cutter i am using i should be able to swing a big enough diameter cut to reach out beyond the travel to machine 90% of the table surface. i have about 19 inch on the back side i can't reach with the machine. that part i can basically do by hand with a indicator and some strategic grinding and draw filing 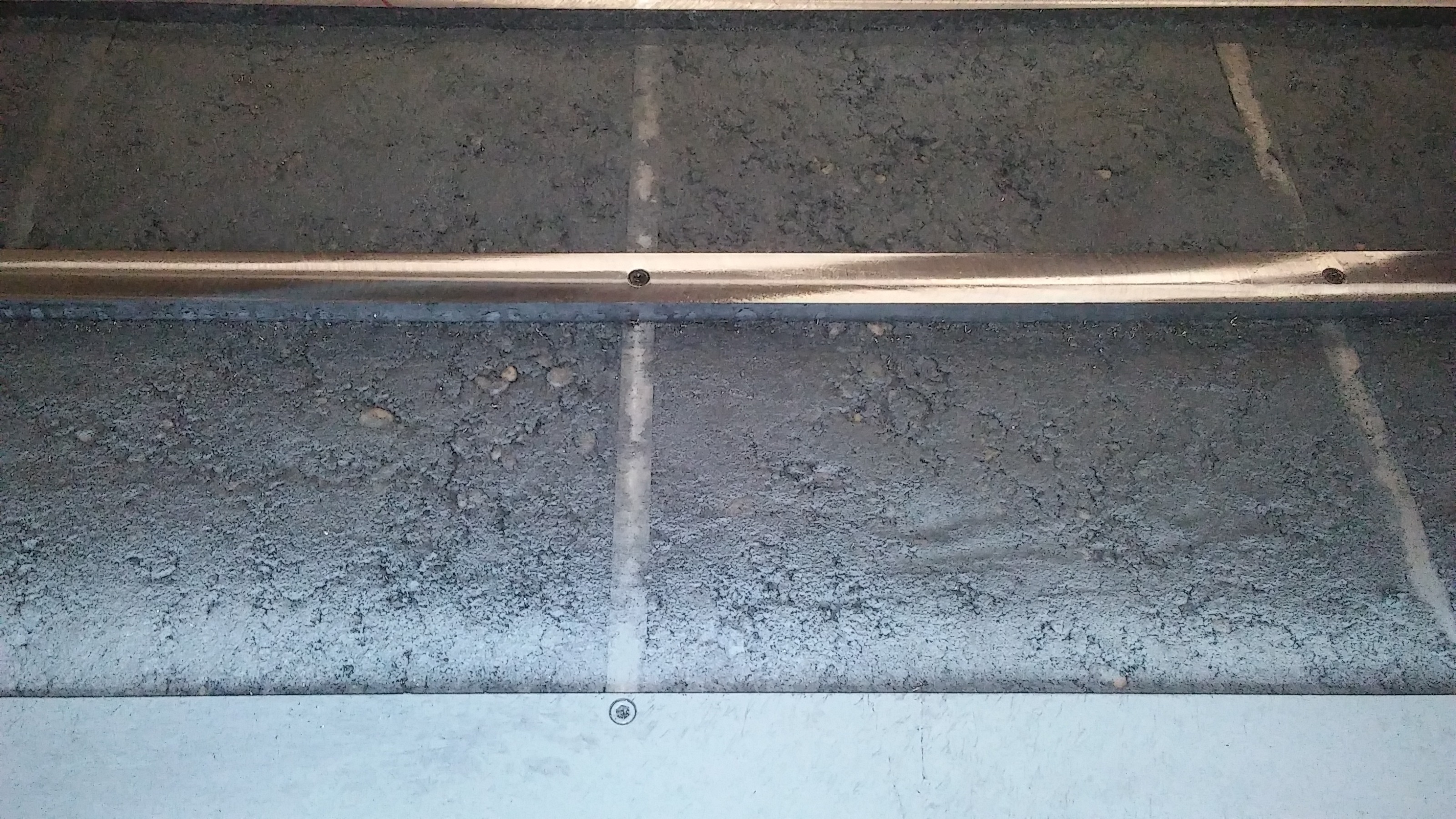 Less More
23 Nov 2020 08:31 #190102 by machinedude
Replied by machinedude on topic just another plasma build and then some :)
i have officially come to the conclusion gravity sucks

this whole flatness thing has turned into quite a bit of work to get straightened out. early on frame stiffness was an issue so i kept tossing steel to it until it got stiff enough. the problem was the sag never quite came all the way out after the frame got stiff. so in a nut shell all the effort to to pre machine the mounting points failed in the flatness department even though the squareness was on the money so i only got half of what i was shooting for as a result.

so after trying to see where i ended up i had to rework the linear rails on the side to remove the bow out of them. what a treat this ended up being

i'm still working on this but have both sides roughly set in place and still need to hand drill and tap the rest of the mounting holes.

i had to grind the sides to create clearance so they could be moved but had to be careful not to destroy the mounting surface in the process because that is what gives me the squareness on the machine. lots of grinding and file work needless to say