My X and Y LS-403's only have index pulses at one end. Havn't had any sign of live from the Z scale yet.

I hadn't heard of MAHO E models with DC main spindle drives. I thought the "E" model MAHO's use three phase spindle drives. The basic "E" with relays to switch the motor, and the 18 speed gearbox for RPM control, an the E2's with fewer gearbox ratios and a VFD.

Mind has the 380VAC three phase spindle motor, with relays to reduce it's starting inrush by starting in Star, and then switching to delta.

I was surprised to find out that the MAHO is a 110VAC machine, except of the spindle drive. Strange for a European manufacturer. At my house I have Two 380 three phase services in from the pillar box at the property boundary, with one splitting to two residual current CS's and then 16A normal CB's. So my basement is on a different circuit to the kitch en oven. Over here even apartments have a three phase supply, for the oven.

Last spring I ripped out and replaced the basement stairwell ( about 5 ton of reinforced concrete), because it was so badly done it was dangerous. No two steps the same run and rise. Worst being 6 inch run 10,5 inch rise. At that time I did consider reinforcing the garage to machine shop doorway with an I beam and widening it, but decided against it. The Boley lathe and Do-all band saw are already in through that door, and half disassembling the Maho should be be way easier than attacking that 14' thick concrete/ cinder block wall.

I get a few weird looks from the neighbors when I crank up the furnace to do castings in the back yard, but luckily the closest neighbors are a retired shop teacher, and another guy who constantly makes furniture in his back yard (he makes more noise than me). They are pretty tolerant.

Last week I was skiing with the kids, but was in the basement this week fixing one of my guitar effects, and think I really need to put on a thicker pullover and get back into the MAHO.
Mark
Last edit: 04 Sep 2018 20:32 by RotarySMP. 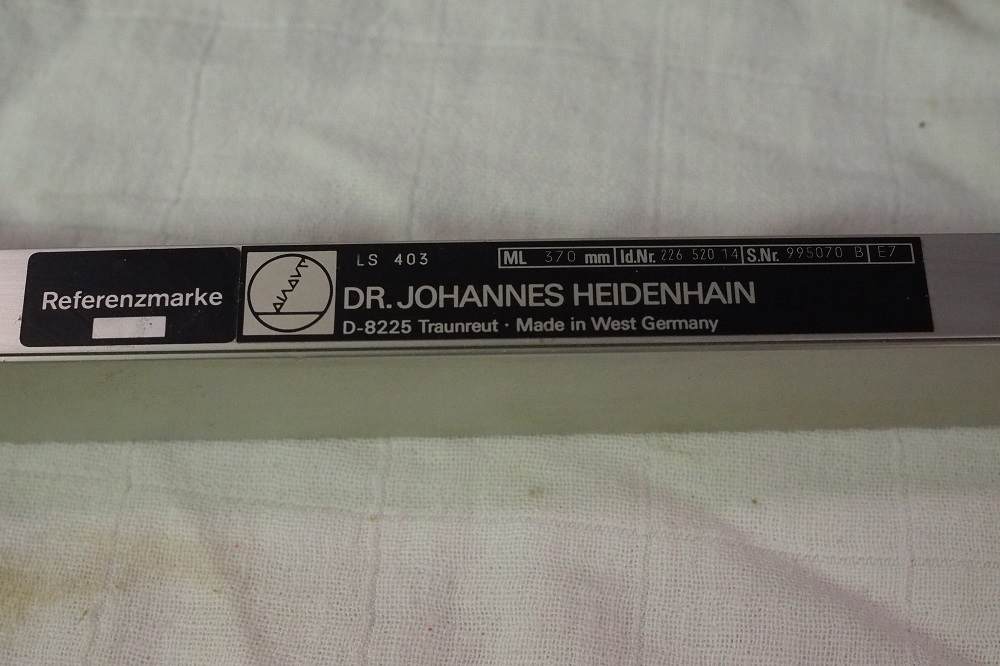 I used digital camera sensor cleaners to clean the scales and the sensor head. 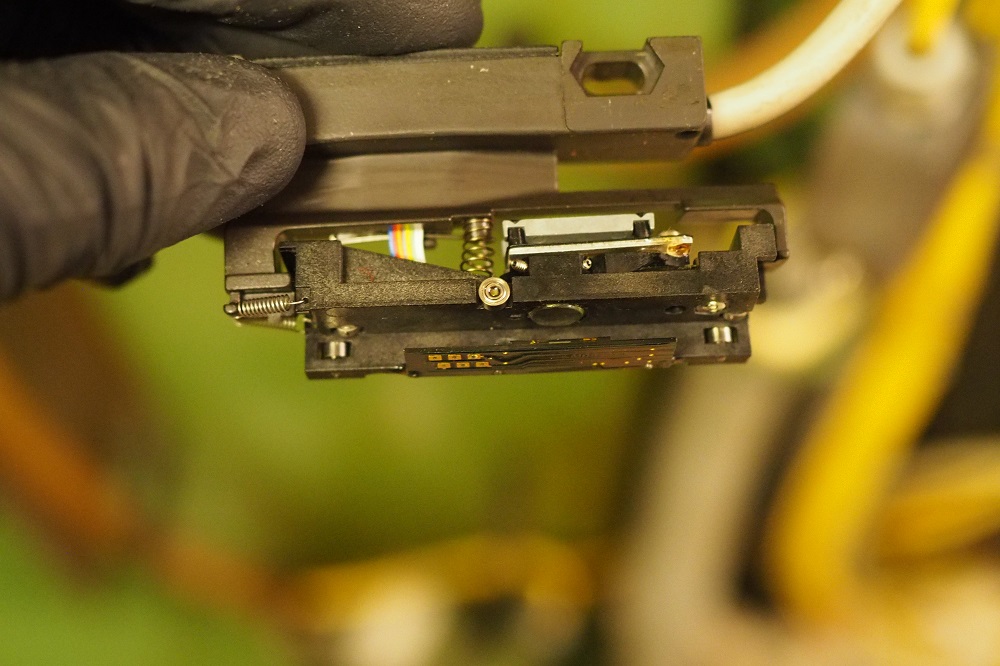 Pretty cool how MAHO built the LS-403 with a temperature compensating mount system. 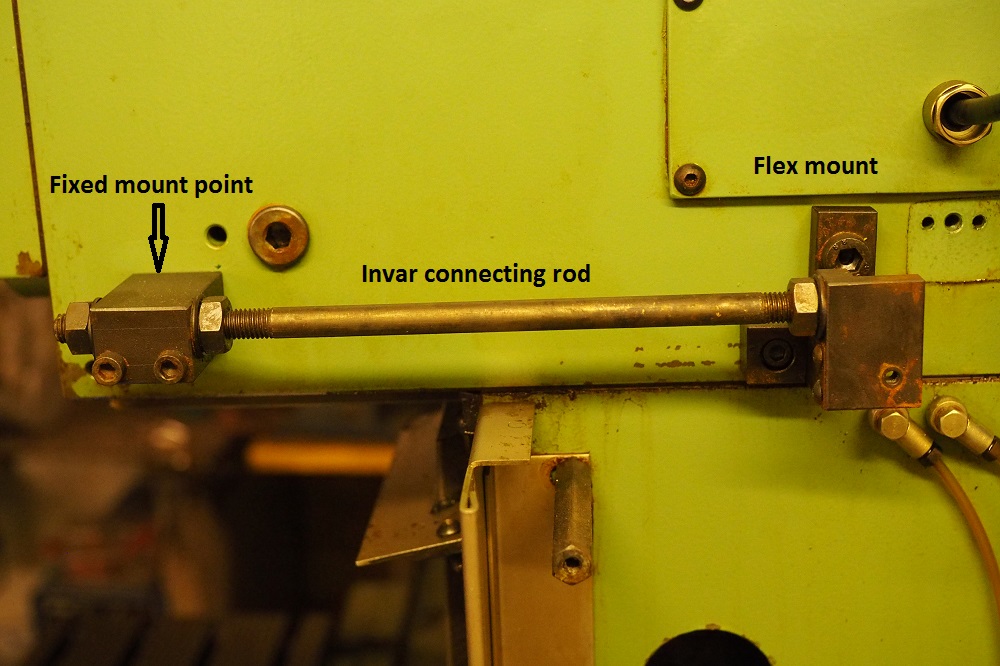 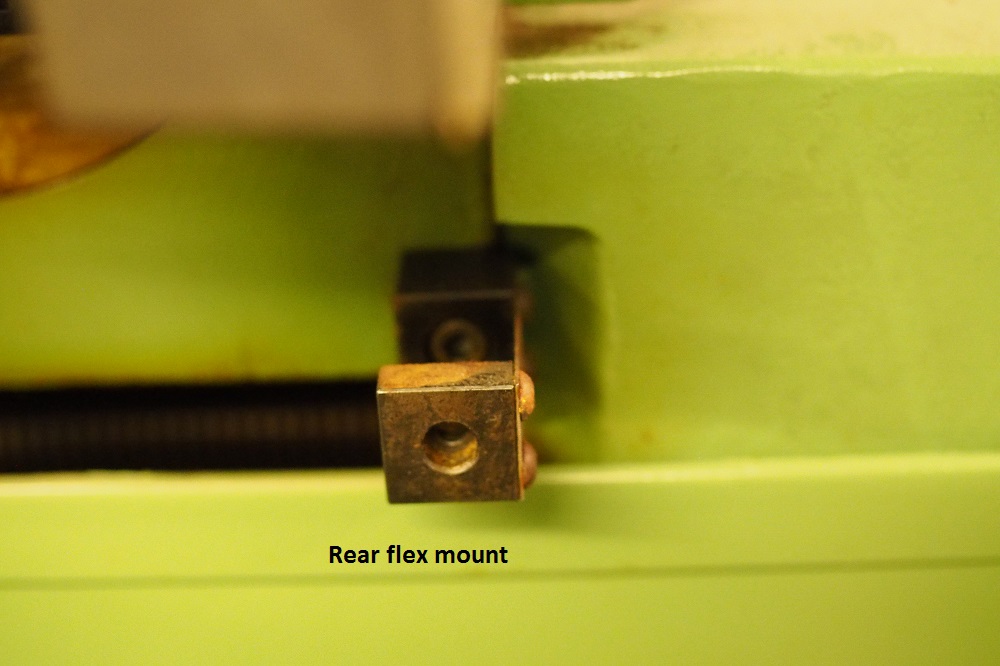 The only rigid mount, perpendicular to the axis travel is the front block. The two at each end of the glass scale are flextures, which are soft in that direction, so the glass scale will detect Y axis (gearbox housing) growth, and the control will compensate.

Tomorrow I need to realign the scale, and sensing head. 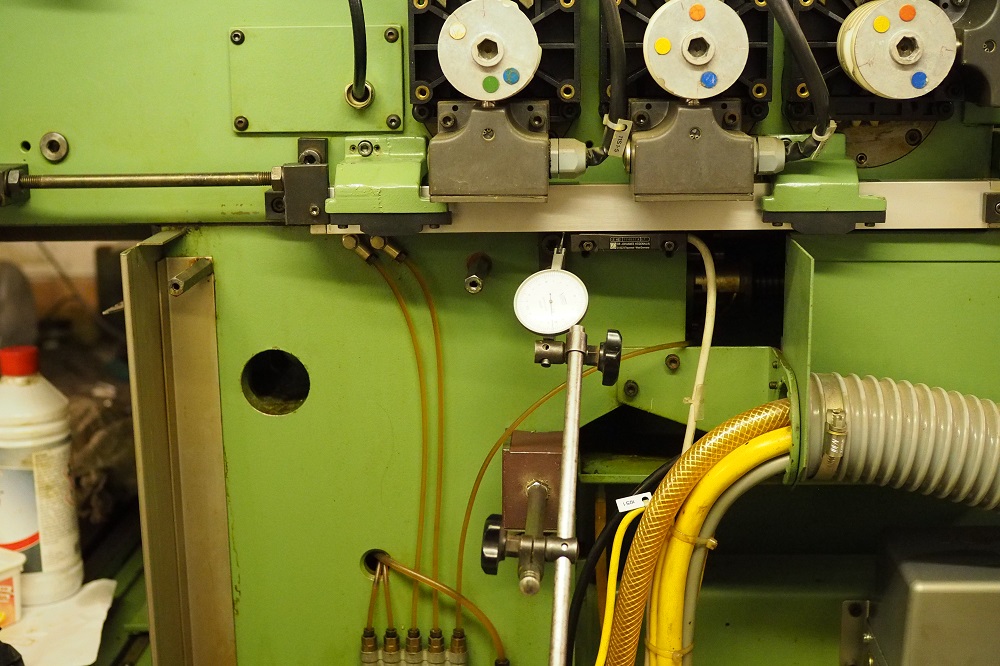 Less More
19 Feb 2018 20:12 #106185 by J Green
Replied by J Green on topic Retrofitting a 1986 Maho MH400E
"432/10 is the version of the Phillips controller." Ok,the 10 series used a later computer processor and I think that MAHO could
then offer more graphic features plus a probe plus greater amount of canned cycles for some of their machine options. I would be
very surprised if a Linux conversion could not do as well as or better then that 10 series controller did. To me it would be very
useful to see a real compare an contrast of testing machine performance using the series 10 or 9 control veers a LinuxCNC control.
Of particular interest would be the current LinuxCNC look ahead / trajectory planner affect veers what ever the series 10 or 9
equivalent is/ was. Think the 8080 was -9 version an the 386 was used in -10 version . But what do I know.

"My X and Y LS-403's only have index pulses at one end." Thanks for jogging my memory. The scales mounted on my machines also only have one end label ( RM ) and it is the spare scale that has a ( zero pulse label ) at both ends. Have read somewhere people
commenting about their scale having the index mark painted over on the glass at one end. When the paint was removed the scale then had two index marks. My thinking was two index marks could help prevent axis over travel train wrecks at both axis ends .
Thus not counting on just the micro-switch at one end of axis travel. Hope your Z scale problem is only a poor solder connection.
But if you do scale surgery, please take lots of photo's. If the read head is removed, might consider powering it to see if the
( I think they are bulbs not LEDs ) light source is OK.

The DC main spindle drives-- The Maho ??400? machine that I saw might have been the model that was between the manual only and their early CNC machines. I do remember it"s spindle motor having a very large air blower on one end. Have seen I-net MHAO photos with various model machines having a large blower arrangement at one end of their spindle motors.
Mark ,thank you for documenting your conversion. It is very useful for present and future gear shift machine conversions. 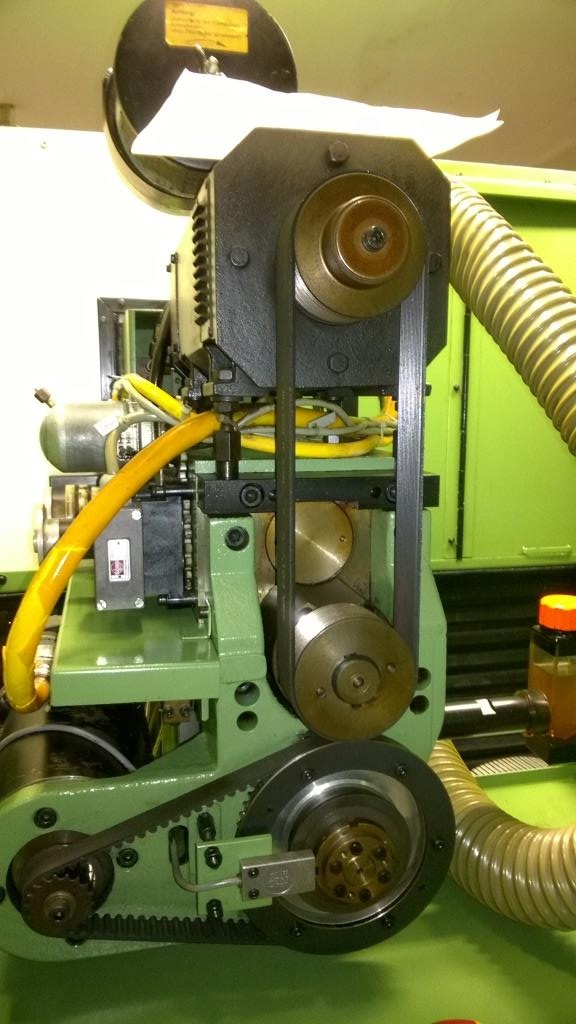 It is controlled by an Indramat TRK 6-4U. 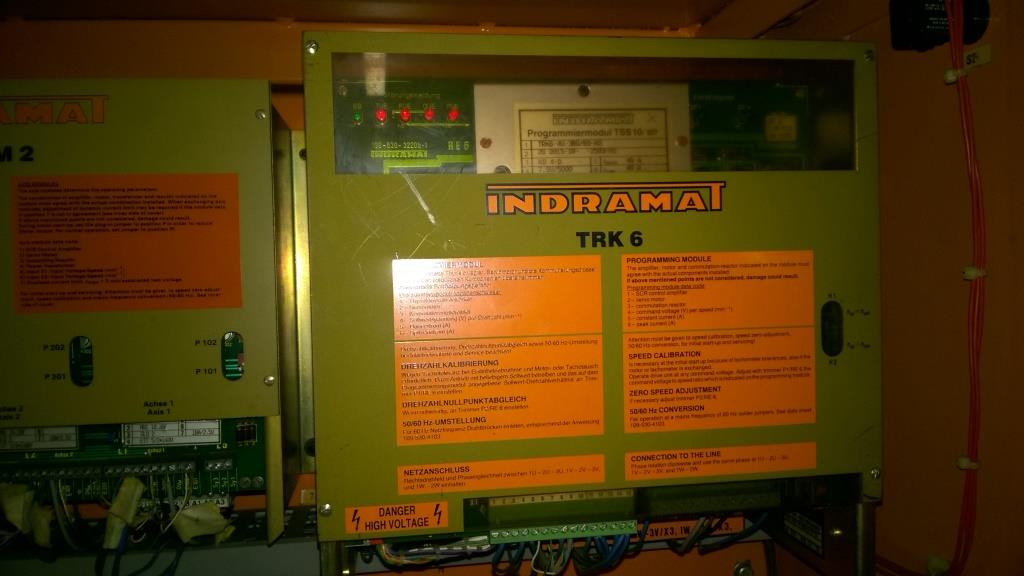 I have the manual if needed. I also have Maho programming manuals for 432/9 and 432/10. It is a bit weird, Maho speaks of Software 6053/302 and version 600/700 respectively, the latter one showing the more complex keyboard known from the 432/10. Anyhow mine only has the the smaller keyboard. 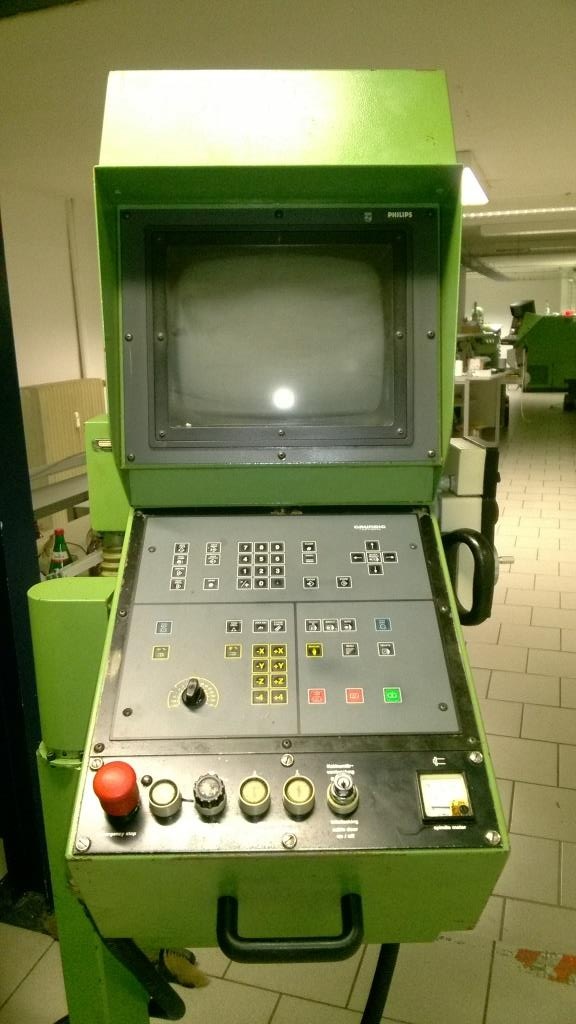 Less More
20 Feb 2018 08:37 #106220 by drimaropoylos
Replied by drimaropoylos on topic Retrofitting a 1986 Maho MH400E
Hi to all, J Green you have removed the components in the red cycle and then you have apply pressure in the point of arrow?
John 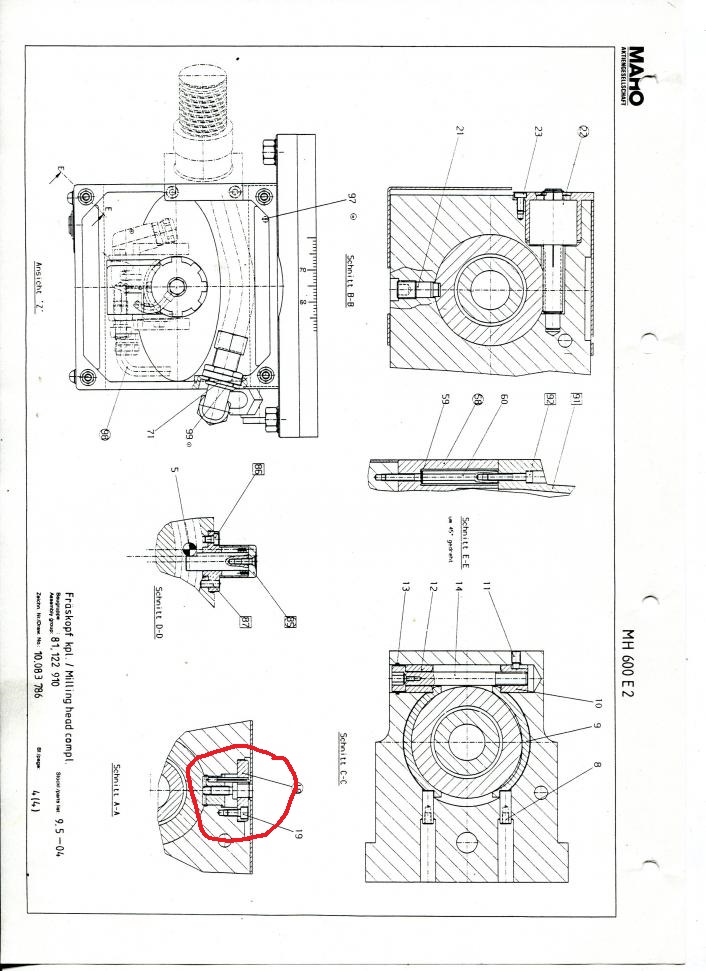 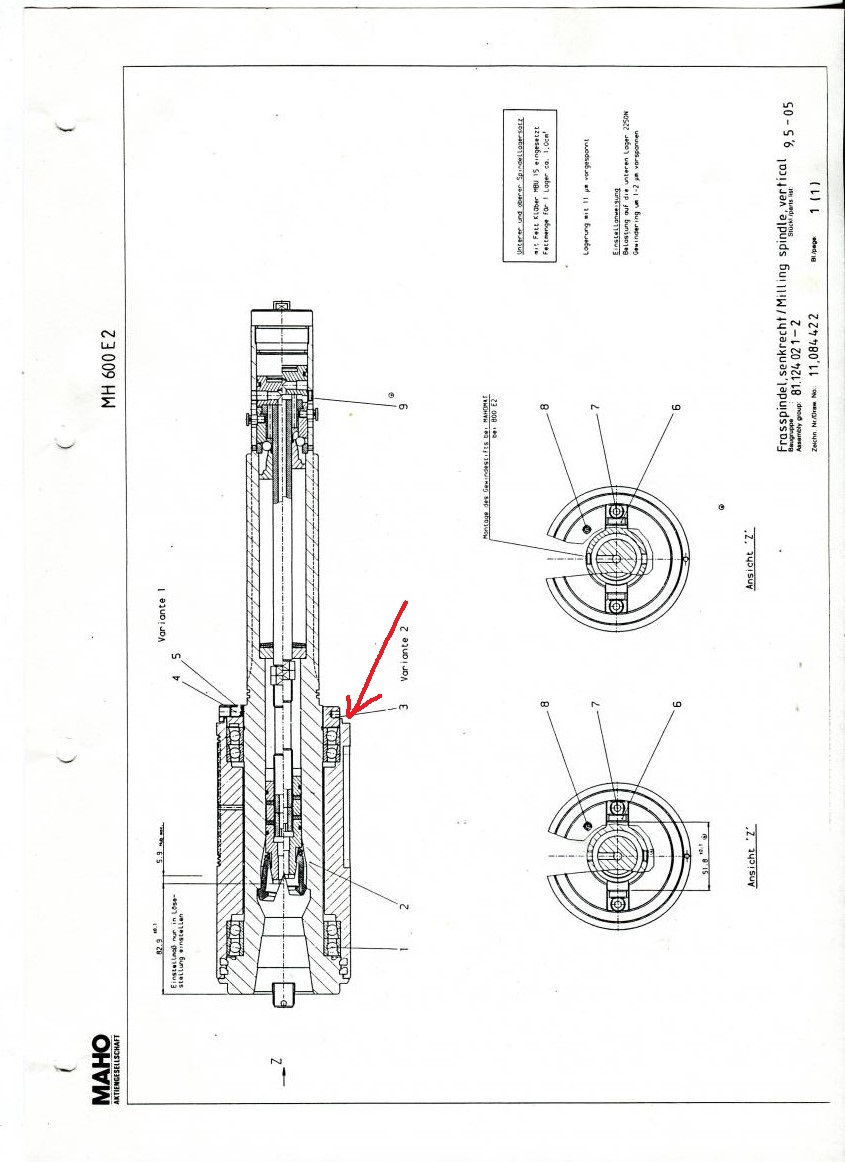 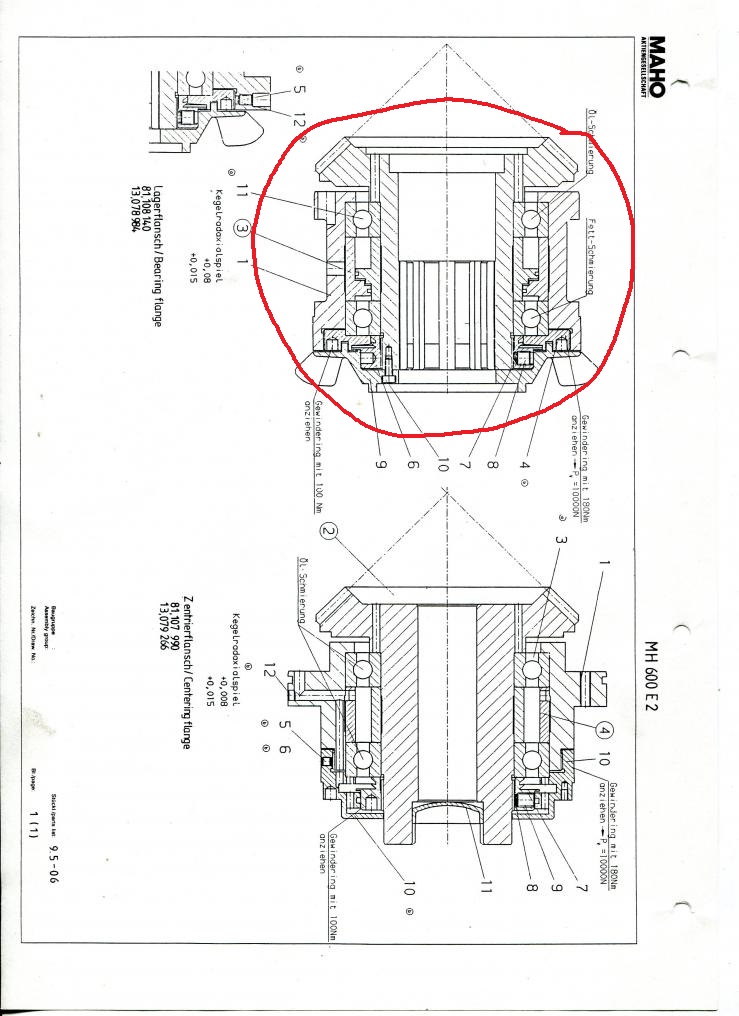 Less More
20 Feb 2018 09:20 #106222 by RotarySMP
Replied by RotarySMP on topic Retrofitting a 1986 Maho MH400E
No wonder these things cost the earth when new, and MAHO ended up loosing this small CNC market. The costs of this constant modification and customisation must have been enormous if barely two machines were built identical.

Mine had a 432/10, but with an 8088 processor. It was only 2 1/2D capable.
Although I never got to run the Phillips control, I have read that they had a very good interface for picking up jobs stopped halfway. The Phillips is also popular for it's conversational programming and canned cycles. You would need the opinion of someone with both Phillips and NativeCAM experience to give feedback whether LinuxCNC is competitive on that front. They must have also had a procedure for on the fly tool changing, although that can also be implemented in LinuxCNC...


I am assuming that the LinuxCNC motion engine is superior as the Phillips had no look ahead did it?

Now you mention it, my Y axis scale does have two reference mark stickers.

I definately tried homing on the RH end ( which would be the ram fully retracted) when I was tuning the axis, but found no index there. I'll try again once I have the scale realigned. I procrastinated on that since saturday.

Less More
22 Feb 2018 23:09 #106356 by J Green
Replied by J Green on topic Retrofitting a 1986 Maho MH400E
cgroth Thank You for the photos an information about the MH300C. That ,to me, looks like a very-very nice machine. It doesn't even have any belt dust from the belts. I am envious. Wish I could find one like it . Am also envious about that nice shop and it's tile floor. That is nice. Wondering what those other Green machines in the shop are? 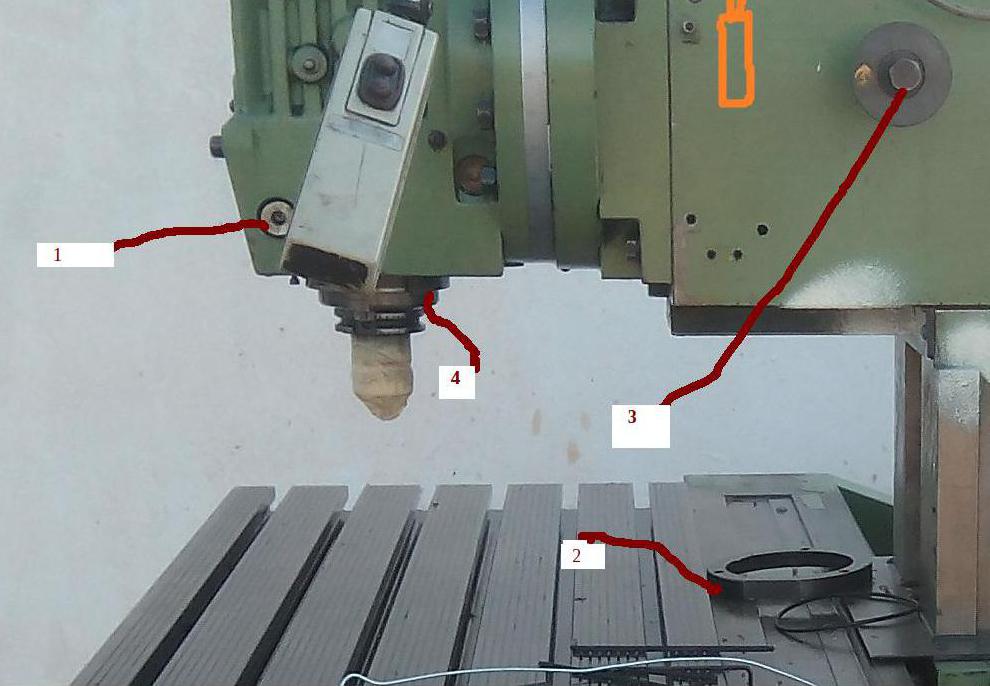 #2 is the steel holding the shaft wiper ,the add on O ring is there also #4 is where the shaft wiper goes ,and spindle nose has two drive dogs that drive the tool holder #1 is another part that was loosened #3 does your horizontal Quill also move ? 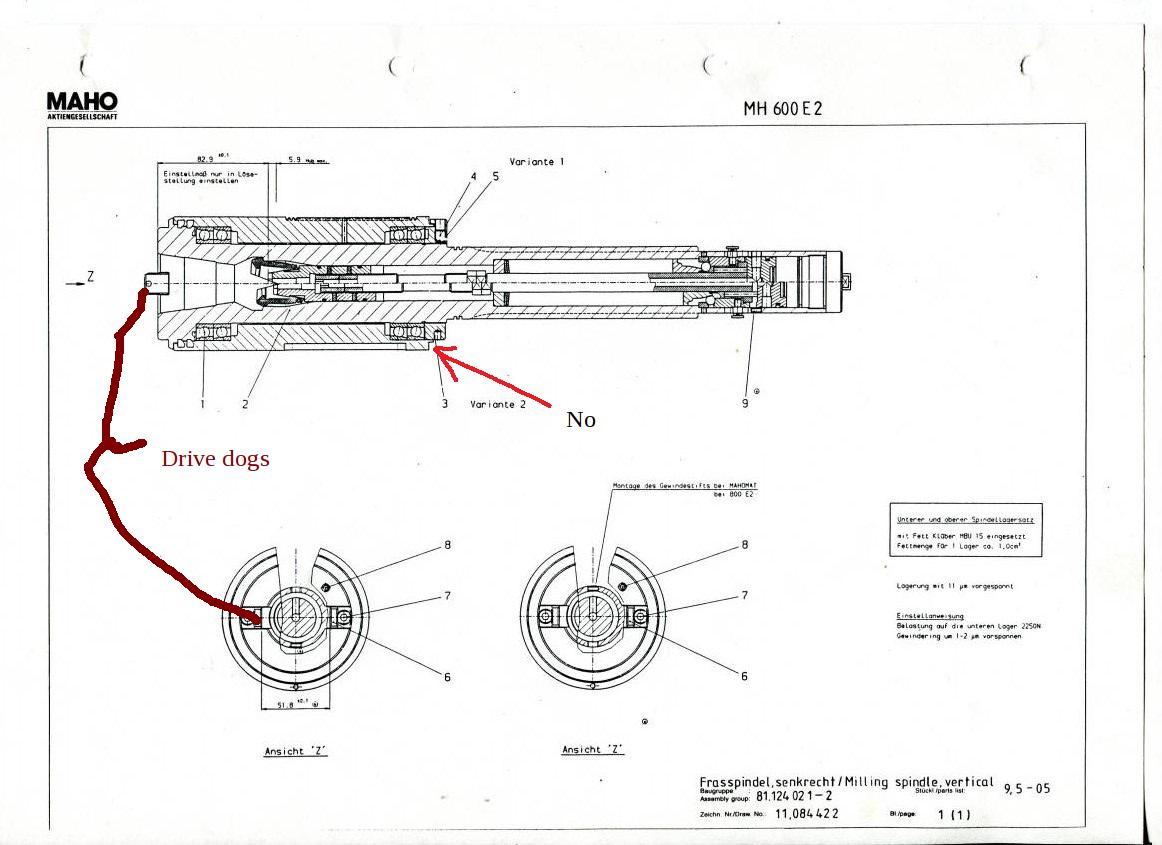 The link "Prìloha" on the LH side has his GEAR change HAL and Comp files. Unfortunately these are commented in Czech, which I can't read, and his machine had the Siemens simoreg DC spindle drive and only two gear ratios, but they are interesting for anyone who wants a solution for the gear changing of that model.

Attached is a google translate of Ing. Cedrych's thesis 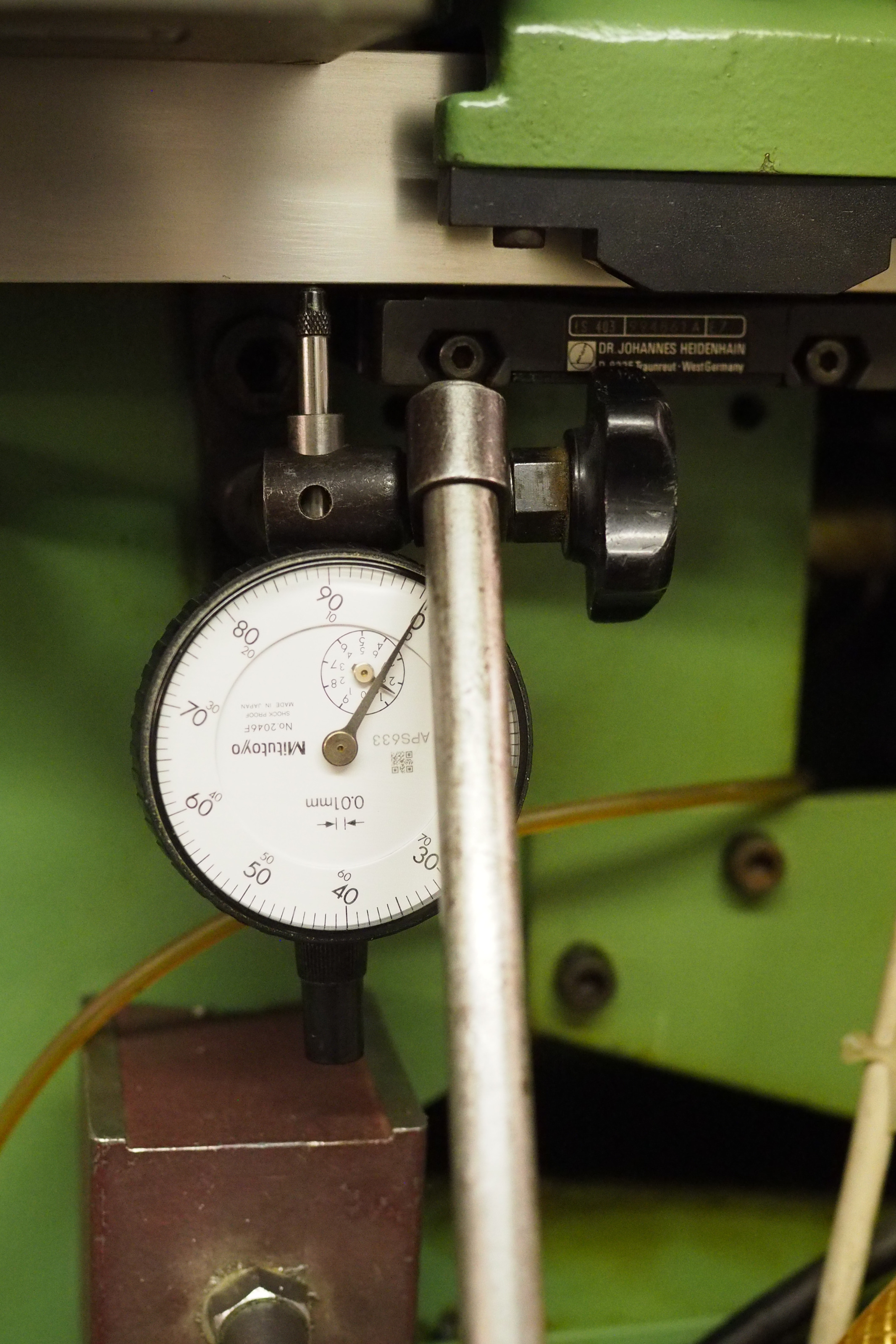 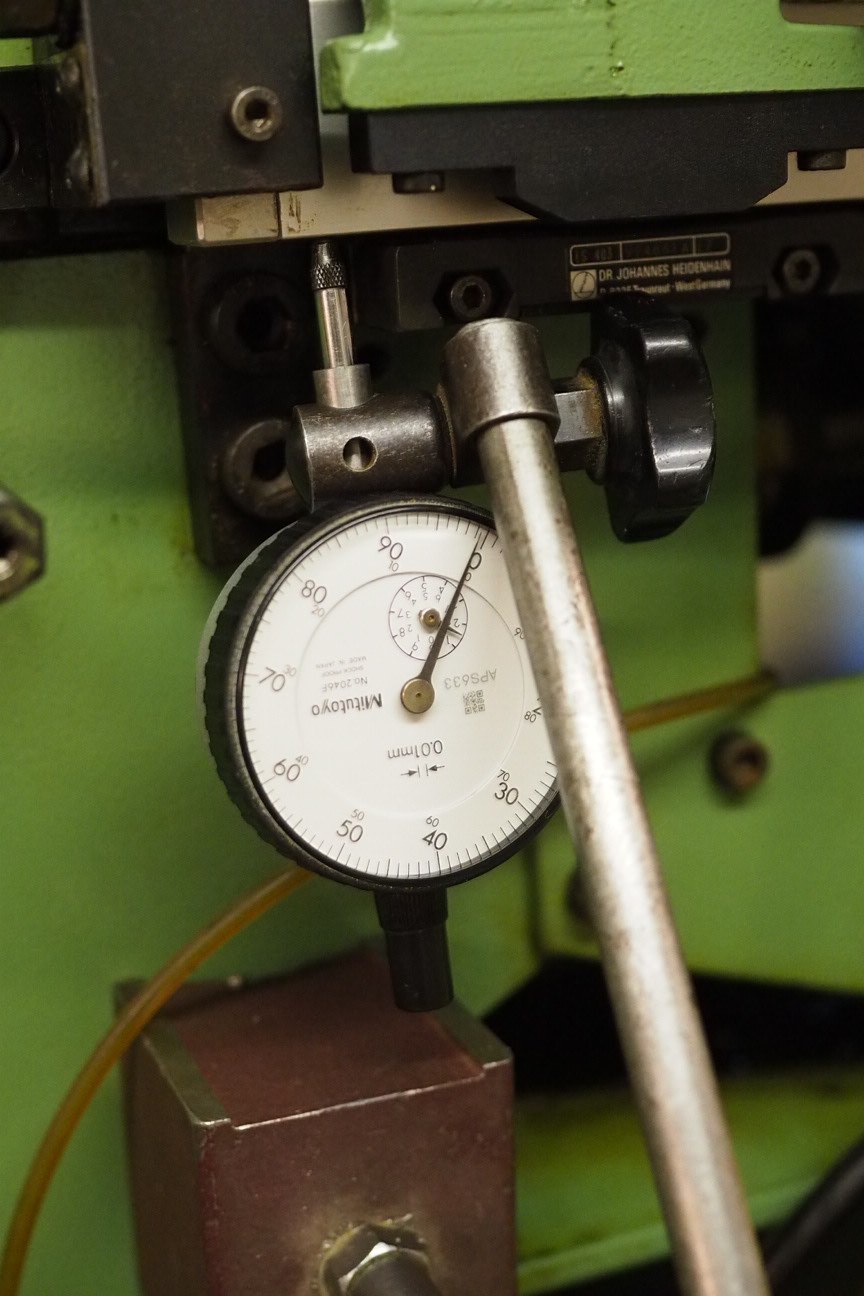 The gap between the scale and the head should be 1mm +/-0.3mm, which was also easy to set with feeler gauges.

After reinstalling the end stop blocks and switch, and testing them, I homed the axis... 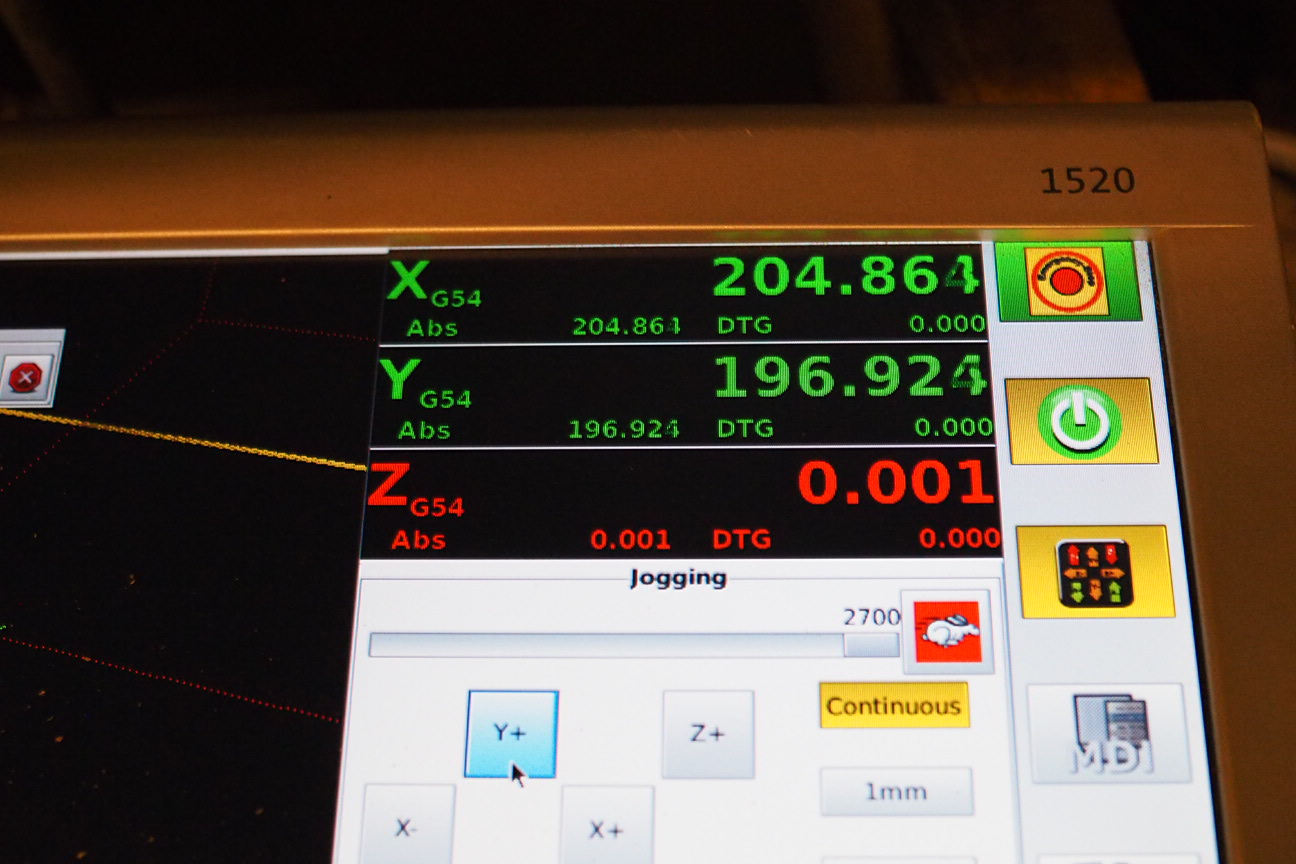 ...and jogged it around for a while, checking it's postion against a ruler. It now seems to work correctly. Where before it was gaining about 20% on jogged distances due to lost encoder steps, now it seems fine.

I also got my USB cellular network datastick working under LinuxCNC which will help with updating and looking stuff up.
Mark