On the spindle page, in the upper left corner, there is a box where you can select +- voltage for forward and reverse.

Un checked this and I get a 0-10 on the analogout5 for both directions. There are also spindle CW and CCW signals.

I have been tied up and not on here at all for a bit. Looks like you are coming along well on your retrofit. I have been super busy with work and working on 2 other EtherCAT controllers. Sorry I was not around for the encoder wiring as I had pics and the TB8 connection numbers. Anyway, will be on along and along hopefully... just have had lot of semi-emergency work calls. Plus been wanting to tinker with the new SilverDragon GUI.

Hope all is going well.

Good to see you're back. Missed your inputs. Lots of water under the bridge since I last heard from you.

Biggest issue right now is we don't have a solid answer to the 80 VAC servo supply. We're looking to find a 480V->80V at 3 KVa transformer. There's one on Ebay. Maybe the answer, but its a little pricey.

I've pretty much achieved full functionality on a prototype basis. I've got motion on all three axes and the quill runs under LinuxCNC control.

Oiler is replumbed. Timer works. Haven't seen any oil in the tubes yet. But that's likely because there's little oil in the oiler. I've got a line on some Vactra #2, but its just not here yet.

I've noticed that the +Y direction motion is a little bit chunky. I've cleaned and oiled the X and Y ways, but don't think I can get to the leadscrews without disassembly. Hoping some oil will solve the problem, but not too optimistic. Don't know if there is a source for new Hurco KMB1 leadscrews.

I haven't taken the quill to max speed yet. Again, would like to get some oil in there first. But its not real smooth. Probably needs new bearings. And, seems to be mostly OK in hi gear, it makes some unhappy noises in low gear.

Probably the head should be rebuilt. Lots of Bridgeport rebuild vids on Youtube. Assuming the Hurco would be similar. First problem is the head is likely North of 300 lbs. Gonna need some sort of gantry to get the thing down where it can be worked on.

And the owner was asking why there is mechanical variable speed, 2 speed transmission plus a VFD. Seems like overkill.

Haven't measured quill centricity yet. I'm waiting for a magnetic mount for the test indicator.

And I'm wondering if anybody out there knows about the oil misters Hurco used on the KMB1?? See picture below. There's a pipe and associated air valve and relay. And a spot on the machine where I think the mister used to live. 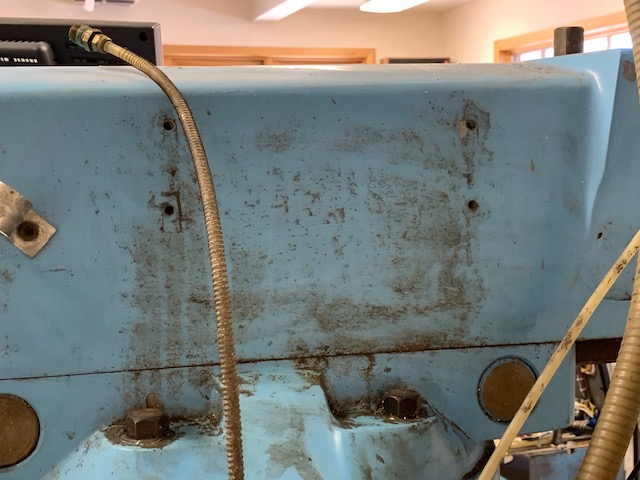 Man sorry I haven't been around... just been trying to juggle too many things at once LOL. Work is long long days at the moment. Yes I am glad to be back and so sorry that I was not around to help (if possible) in the last few weeks.

"measured about 0.0005 inch spread from one end to the other on the X and Y axis. And most of the 0.0005 is on the ends. I'm pretty happy with that result." Yes that is actually super good.... glad that you did not have a wore out machine.

I think you are correct on the thought of a oil mister. I went through the bulk of my pictures last night and did not find any machine with the mister bolted exactly there. I could not find any pic of a KMB1 that had it at that spot, but I did see some of the newer KM3 models that had it bolted on that side, but further forward than where yours is located. Plus I think most of the ones that I saw were 2 bolts only. With how the grime looks, it would have to be the mister that was located there.

This pic is of a KM3, so that is why this one looks al little different, but about the closest I could find with the mister in the approximate location. 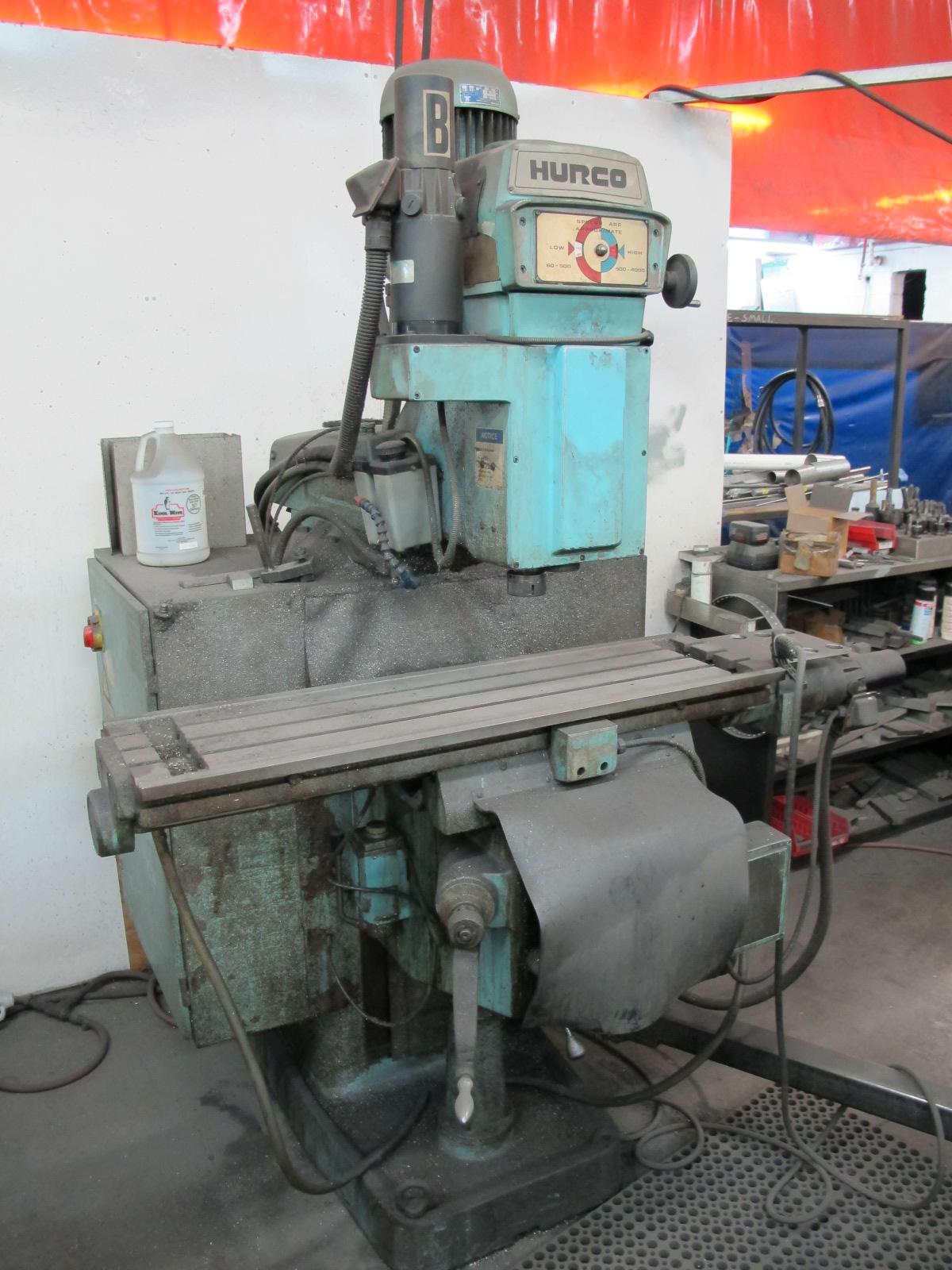 One thing that I thought at first was that it might be where the tool changer bolted. I know the model for my machine was on that side, but the newer KM3 models had it on the right hand side. I actually had a picture of a KM3 model with one bolted on and the actual model number was KM3CP. I only brought up about the tool changer as it was 4 bolts on your machine and that came to mind before the mister... but the grime definitely looks like a mister was there. Here is the pic of the newer KM3 model with the tool changer on the opposite side. I have a rough pic of my model of machine, but if I find one of yours I will upload it. I sure wish I had one of these, but I did read in the past that they were kind of wonky when operated.... but still would love to have it for multi tool runs. 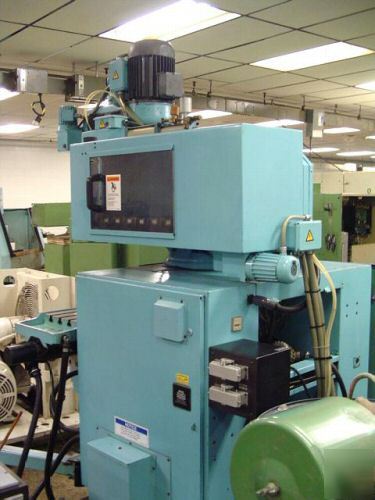 I will go back to your previous post before the last one and see if I can help you on some of the issues. You definitely have been making some good progress.


Will be back,
Robert

Its kind amazing how many different models Hurco must have had. I don't think I've seen a picture of one that looks quite like the one I've got.

I did measure the quill wiggle. Came up with about 0.0008. Not sure what a good number would be, but this seems a bit high. When I run the quill, there seems to be some visibly noticeable wonkiness. Hopefully, that's mostly in the Kwik Switch collar and not the quill itself.

I got the oiler working, or at least mostly working. Its hard to tell if all the lube points are actually receiving oil. Couldn't find any data on what to set the oiler air pressure at. Any advice?

The head has a two speed transmission. Hi gear seems to be OK. But low gear makes some unhappy noises. Hoping the oiler will fix this, but I'm not so optimistic.

The brake cylinder works, but doesn't seem to have much impact on the quill.

We had picked up a 0.750 kwik switch tools holder off Ebay. When I measure the diameter, I get 0.835 inches. Its got a Universal part number that corresponds to a 0.750 tool holder. I measure about 0.008 out of centricity. I doubt Universal would sell such a thing. Hard to say what happened. Perhaps somebody bored it out... poorly. We've had this holder for a couple months, its hard to send it back. In the future I think we'll measure soon after we get a new tool.

At this point I'm thinking a head rebuild might be in order. My guess is the head weighs about 300 pounds. Don't have an easy way to safely hoist such a thing off and on the machine. We'll see.

I have pretty much full functionality on the machine now. But its in sort of a prototype phase. See attached photos for the entertainment value. 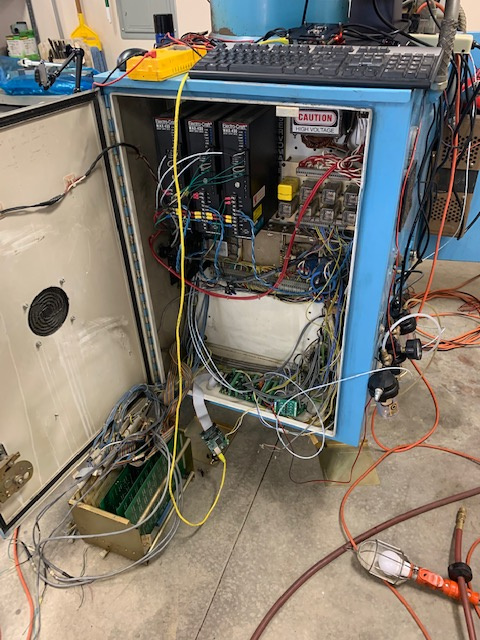 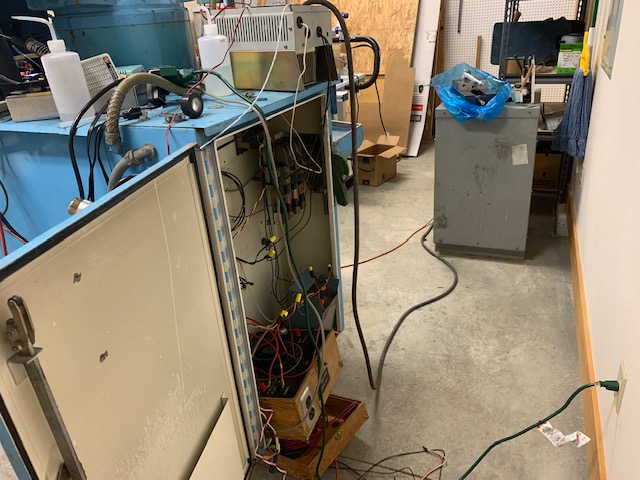 Currently working on mapping the Hurco control paradigm to the LinuxCNC. This is a challenge because I've never used either. Some of the finer points will probably go missing. But I think I'm just going to take my best shot at it and then use the machine and fix what doesn't work out.

I think one of my first projects will be to build some mounting bracket for the air regulator. Its currently ty-wrapped to the back of the machine. Make it out of easily machined aluminum. Doesn't need to look good or be very accurate.

Completely rebuilt the AC cabinet. About the only thing original now is the servo drive contactor. Which is barely visible in the picture. 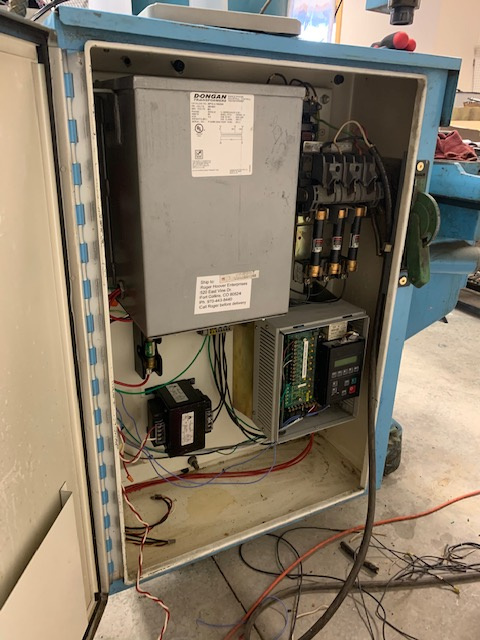 This rebuilt AC supply side is very substantially simpler than the remnants of what used to be there. A bit hard to understand what all the wiring was for. I guess its the difference between 1980s and 2020s electronics.

Removed the Hurco console box, the old 6800 based computer, and the cable from the arm. Actually got the cable out in one piece. This stuff is completely intact. When I started the computer actually ran, the display worked, and it would try to load the tape. But I could never get the tape to load correctly. Anyway, I think these pieces are available if someone is trying to restore a Hurco back to original condition.

I've run the example LinuxCNC program without a tool or workpiece. The machine acts as expected.

Pretty concerned about the slop in the quill. Still learning about Kwik-Switch 200. I'm hoping part of the slop is due to excessive user ignorance.

Working on replacing the old console box with a shelf and mount for the LinuxCNC computer.

Still working on mounting the Mesa hardware in the right side cabinet. Its currently quite a big pile of PC boards and wires.

Also learning how to use LinuxCNC and G-Code. 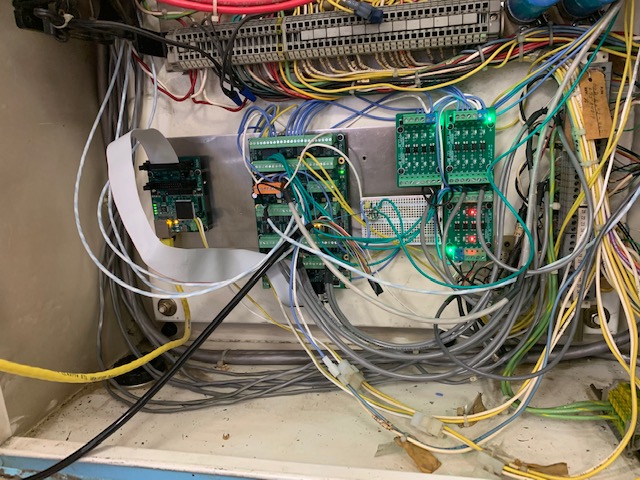 I've actually used the machine to mill out a couple of "production" pieces. The gray AL plate behind the electronics in the picture above and a front panel for a friend's tube based audio preamp.

Did the preamp piece first. Had a little incident. Was just about done and all of a sudden instead of sending nice little chips in the air, it sort of started sending the cut aluminum out as toothpaste. I let it finish. The completed piece was usable, although the cosmetics were degraded slightly.

Clearly, the end mill got too hot and started to melt the AL instead of cutting it. I think it was the result of some combination of too heavy of a cut, possibly some "gummy" AL and possibly quill runout.

The quill on this machine has maybe 0.005 runout. Ya. I've heard that out of center tooling leads to low tooling life. Which is probably the result of non-uniform work done by the cutter. Anyway... it was a learning experience

I was amazed I didn't snap the 3/8 end mill. I'm glad to report the Hurco/Kondia iron didn't seem to mind at all. This machine is a beast.

Here's what's left:
Editorially I'll say, I've been quite pleased with my LinuxCNC experience. I haven't found anything to dislike about it. While not an expert, I am very comfortable with Unix. I think fear of Linux is a big factor for many potential users.

The Mesa boards have worked well. But... the documentation is rather terse. Figuring out which of the many boards fit your application best is difficult. While I know there is an FPGA on the 7i92 board, its not clear what it does or could do.