Less More
12 Feb 2019 13:29 #126266 by Todd Zuercher
Replied by Todd Zuercher on topic Rods "Spaceship" Scratch built Plasma Cutter build
It is, but... Things go wrong, what happens when a program gets aborted before completion with who knows what settings in place?

Less More
13 Feb 2019 09:52 #126331 by rodw
Replied by rodw on topic Rods "Spaceship" Scratch built Plasma Cutter build
Well, I did not get much done today. I went and saw the company I purchased my plasma cutter from on my rounds today to get some consumables and they sold me over $400 worth of consumables for $100.

I also came back with some 12mm and 16mm flat bar and sorted out stuff for supply of plate steel. I found a company that will cut 1200x2400 sheets in half for me which will be handy.

I twas so hot here today and hit over 36 degrees C. It was that hot, I grabbed a bottle of water and went down to the back of my shed but by the time I got there, I had to come back for another drink! I think Islander said it was about -4 at his place the other day!

Anyway, I got to the bottom of my digital output issue. It comes about because the Sheetcam post I used as a base always kept the THC disabled when idle. With a hpid config, its the other way round. Only hold THC action for short periods when you need to. So when I realised it ws not going to be one line of code fix, I retired to the airconditioning to work on it which kept me amused for the rest of the afternoon. Anyway, now I have a working post processor and checked all the code it generates so hopefully LinuxCNC won't complain in the morning. There is now a lot of redundant code in the POST. One day I'll clean it up.

I always reckoned that you could always warm up but couldn't always cool down but I'm not sure how I'd go living where you do! I bet your summers are nice though! I never saw snow in my life until I went to New Zealand when I was 50!

Anyway, I had some learnings today. First the sheetcam cutting rules can get you into trouble. I was crashing on a couple of arcs until I removed the arc rules. What was happening is the torch would hit the plate, trigger the probe input on the float switch and stop motion. So I used one more digital output and wrapped M64/M65 around the probing subroutine in my touch off routine. So now the probing signal is disabled unless the touchoff is called so it won't happen again. I think I should also do something if the float switch triggers while cutting to tidy this up. I think this should pause motion. I also should look at some hal plots becasue I think the combination of the corner lock component and the trajectory slowing down on holes might nearly be enough to allow holes to be cut.

I need to think about the impact of changing the feedrate when cutting a hole as this might affect our corner lock stuff.

I also have to change the way I have the breakaway wired in. It currently an estop event but I think this would be better off it just paused motion as that would make it easier to recover from.

I have to look at how I turn the torch on as it was spewing fire when it fell off. I had this happening once before due to the way Dewey imagined things worked. I thought we'd fixed it.

I realised after answering a question asked elsewhere that it will be a trivial matter to modify one of my components to output the change in voltage over time (dv/dt) which could be used for a kerf crossing sensing component.

Then this afternoon, I took a deep breath, changed some consumables and cut some parts from 16mm mild steel at 120 amps. This worked quite well but I need to add a delay to the torch off as one piece I actually grabbed the angle grinder to cut it out. I know Islander has a time off delay on the torch so its easy to add, just not sure how long it should be or if it should vary with material thickness. Any feedback or ideas on this would be appreciated.

So if I can get that far, I think it will be time to package this up but everything that needs doing is pretty simple

Less More
15 Feb 2019 03:22 #126519 by rodw
Replied by rodw on topic Rods "Spaceship" Scratch built Plasma Cutter build
Well, I cut one more 16mm part today. I only bought a piece of flat bar and I had a couple of goes becasue I did not get it to fit on the remnants the first couple of goes. I tried using an overburn in sheetcam today and found the THC did not like it. But by starting on a good straight run, I got my parts out. I'm going to see if adding a delay on the end of ArcOK will make a difference.

So I've sucessfully cut from 2mm to 16mm mild steel at 40 to 120 amps with the hpid config so I need to start packaging it up once I get through my todo list in my last post.

Here is a video.


I think it would be pretty expensive dialing the machine in on 16mm steel so this might be as good as I ever get!
The following user(s) said Thank You: phillc54

Less More
20 Feb 2019 12:34 #126813 by rodw
Replied by rodw on topic Rods "Spaceship" Scratch built Plasma Cutter build
Well, I've still been trying to do a little bit each day. I cut a part from 12mm at 40 amps yesterday which was a bit of a failure until I increased the amps. But the slag fell off very easy. Anyway, after hacking it out with an angle grinder, and opening out some holes with a drill bit, I was able to check fit it to a vehicle.

Yesterday, while cutting, I monitored my revised component I used to decode the THCAD inputs to a voltage using halscope. I've basically rolled everything to do with torch volts into this component which makes it very efficient as it avoids a lot of duplicated hall connections. the dvdt showed an immediate and significant jump when kerrf crossing at end of a hole. I need to look at a lot more cuts before I can implement a hold for kerf crossing but from what I saw, I think I will be able to sense a kerf crossing event on the servo thread cycle that it first happens on. If not then, then certainly on the second. That means we can sense this in 1-2 milliseconds.

But thats the easy bit, sensing the end of the kerf crossing event will be a bit more complicated. I've got some ideas but need to collect some real data to see if the ideas will work in the real world before I code much.. Of course the easy way out is to just wait for a time period and see if its safe to re-enable!

On the build front, the last piece of my air system arrived today. An auto drain for the tank. 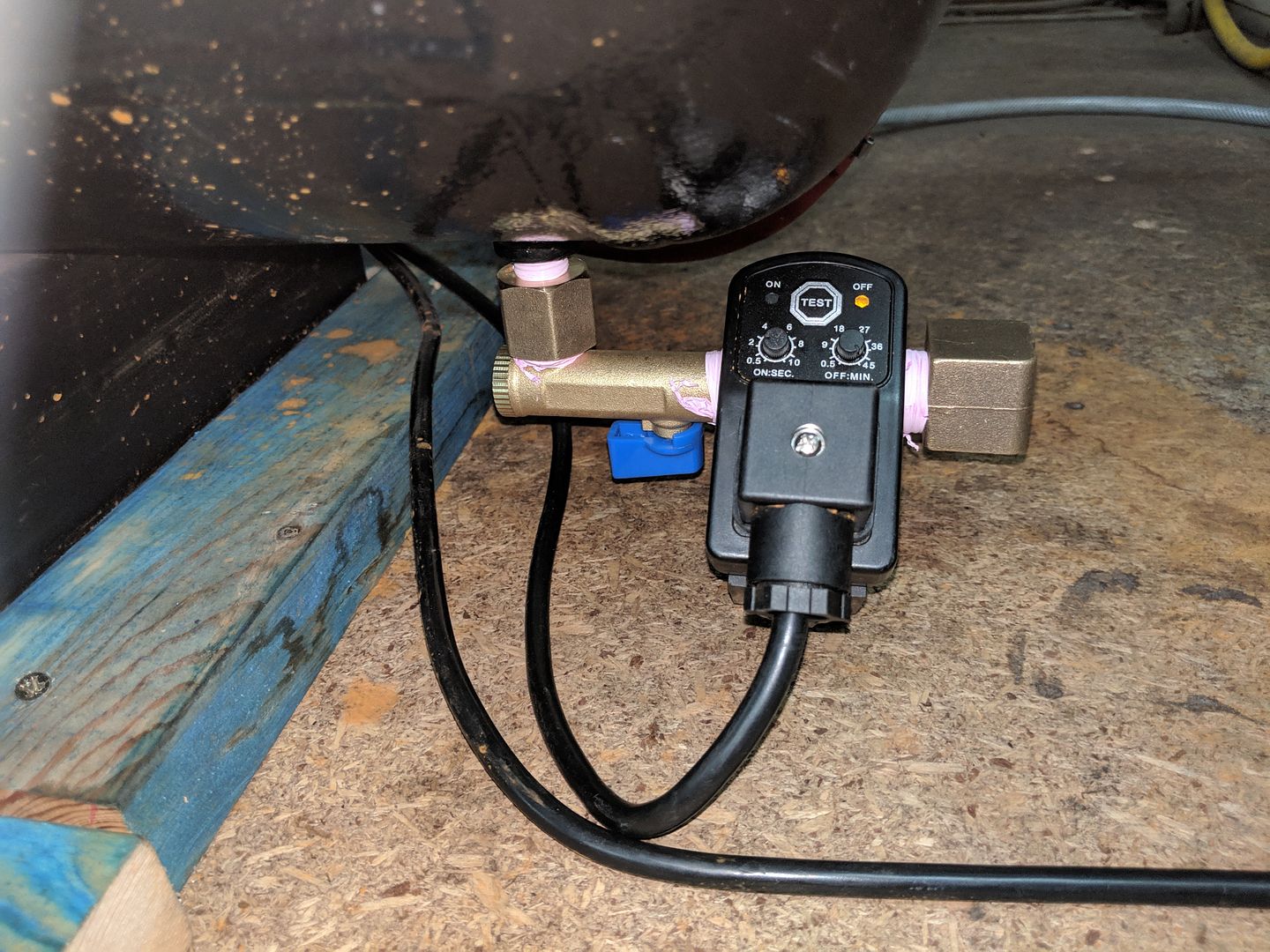 I need to add a drain hose to this to duct condensate away from the machine into a nearby copper drain pan for a hot water system. Ultimately, I think I'll hard wire this into the compressor itself soit triggers for say 10 seconds every 30 seconds only when the compressor is running. What do people do with these things?

Less More
16 Apr 2019 12:08 - 16 Apr 2019 12:12 #130974 by rodw
Replied by rodw on topic Rods "Spaceship" Scratch built Plasma Cutter build
Well finally, i had a few hours to work on the spaceship today. Since I upgraded muy plasma cutter the original drag chain was bursting at the seams so we managed to fold up a new piece of aluminium so we could fit a larger drag chain. Originally, I used a piece of aluminium angle but there was not an extrusion the size we needed. It was a bit of a team effort as I had the sheet metal a mate had a guillotine and another mate had an old brake press.

While I Was at it, I ran a wire up to the torch for the ohmic sensor

So the next task is to install an ohmic sensing circuit back in the control panel. This is long overdue.
Last edit: 16 Apr 2019 12:12 by rodw.
The following user(s) said Thank You: phillc54

I've had my plasma cable inside the cable chain with the other cables for ten years now with NO EMI problems. Yes it is a blowback start TD power supply like yours so no HF/HV.

Less More
16 Apr 2019 21:26 #131007 by rodw
Replied by rodw on topic Rods "Spaceship" Scratch built Plasma Cutter build
Thanks guys. I've been using a drag chain ever since I built the table. Even with the wires pressed so hard against the torch lead so hard the old drag chain was popping apart, I've never had any EMI issues when cutting at up to 120 amps. Even my neighbour's commercial table with a 200 amp HF start Hypertherm uses a drag chain. He uses an earth stake through the concrete slab but I have not needed to do that so far.